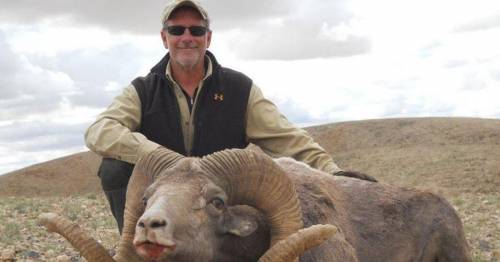 A dentist has been accused of killing his wife on an African hunting trip as part of a scheme to collect millions of dollars in life insurance money.

Lawrence Rudolph, 67, allegedly murdered his wife Bianca in Zambia in 2016, then fraudulently claimed $4.8million in life insurance benefits, but he strongly denies any wrong doing.

Rudolph, who founded and operates the Three Rivers Dental in Pittsburgh, Pennsylvania, allegedly rushed to cremate devout Catholic Bianca in Africa in the days after her death.

According to investigators, Bianca was shot in the chest with a shotgun in the early hours of October 11, 2016.

Rudolph told gamekeepers and scouts, who had rushed to the pair's cabin after hearing the gunshot, that he was in the bathroom at the time and that she had accidentally shot herself while packing up her gun for a day's hunting.

Lawrence Rudolph with his wife Bianca during a 2011 hunting trip
(

The pair were reportedly both big-game hunters and had frequently travelled to Africa for excursions. During this trip, it was said Bianca wanted to shoot a leopard.

At the time, the death was ruled as an accident and Rudolph was allowed to travel back to America. In the days that followed, the dad-of-two claimed nearly $5m in insurance benefits from seven different companies.

The FBI began to look into the case after a friend of Bianca's contacted them to express suspicions about her death.

It was alleged that Rudolph had had affairs during the couple's long marriage, and it was claimed that on the day of Bianca's funeral he booked a plane ticket for his girlfriend to fly from Pittsburgh to Phoenix.

Lawrence Rudolph denies the charges against him
(

As part of a five-year investigation, FBI agents interviewed a former employee of the dental practice run by Rudolph, who claimed that he was seeing a former manager. The ex-employee said the alleged girlfriend had told her she had been in a relationship with Rudolph for 15-20 years.

Investigators said that by January 2017, Rudolph was living with the girlfriend.

It was also found by the FBI that it would have been physically impossible for Bianca to accidentally shoot herself with the gun, with investigators determining that the mum would not have been able to reach the gun's trigger.

This eventually led to Rudolph being charged with foreign murder and mail fraud.

In a statement given to Mail Online earlier this week, Rudolph described his wife's death as a "terrible accident".

"This is an outrageous prosecution against Dr. Larry Rudolph, a man who loved his wife of 34 years and did not kill her," attorney David Oscar Markus said.

"Back in 2016, his wife had a terrible accident during a hunting trip in Zambia. The investigators on the scene concluded it was an accident. Several insurance companies also investigated and agreed.

"Now, more than five years later, the government is seeking to manufacture a case against this well-respected and law abiding dentist. Dr. Rudolph looks forward to his trial where he will demonstrate his innocence."

Previous : Turkey lifts PCR requirement for unvaccinated in some areas – Anadolu
Next : A tsunami advisory has been issued for the US West Coast and Alaska