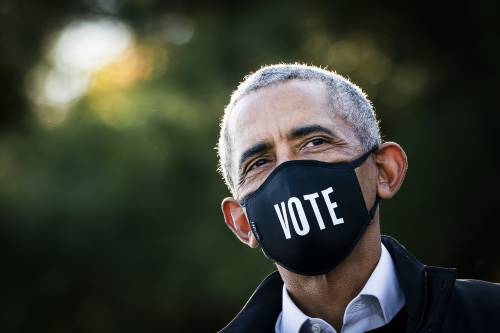 “All of us, as citizens, have to recognize that the path towards an undemocratic America is not going to happen in just one bang. It happens in a series of steps,” Obama told Anderson Cooper during an interview that aired on CNN on Monday evening.

Asked by Cooper if the January 6 insurrection and Republicans’ effort to delegitimize elections has led him to believe that our democracy is in crisis, Obama said he’s concerned.

“I think we have to worry when one of our major political parties is willing to embrace a way of thinking about our democracy that would be unrecognizable and unacceptable even five years ago or a decade ago,” he said.

In an exchange with Cooper, Obama pointed out that democracy has fallen at the ballot box in other countries.

These comments, coming from a former president, should serve as a wake-up call to anyone who thought Donald Trump’s departure from the White House in January ended the existential threat to American democracy that crested with the January 6 insurrection.

Those threats remain: The 44th president is right that there are good reasons to worry, given that Republicans responded to Trump’s defeat and the insurrection not with introspection, but by pushing an antidemocratic agenda aimed at making it even harder for them to lose elections in the future.

Obama’s concerns come about a month after a FiveThirtyEight analysis of recent polling indicated that the GOP’s big lies about the 2020 election — namely, that a combination of election fraud and illegal changes to state voting laws resulted in Trump having the presidency stolen from him — are having a corrosive impact, with 70 percent of Republicans wrongly believing President Joe Biden’s victory over Trump was illegitimate.

And things aren’t likely to get better soon, as Trump is now back on the speech and cable news circuit pushing these lies at every opportunity.

And as Obama noted during his sit down with Cooper, state-level Republicans are responding to the big lie by writing legislation that warps the voting process, as Vox’s Ian Millhiser recently explained:

It’s that second type that appeared to worry Obama during his interview with Cooper.

“When you look at some of the laws that are being passed at the state legislative level, where legislators are basically saying, we’re going to take away the certification of election processes from civil servants, you know, secretaries of state, people who are just counting ballots, and we’re going to put it in the hands of partisan legislatures, who may or may not decide that a state’s electoral votes should go to one person or another, and when that’s all done against the backdrop of large numbers of Republicans having been convinced, wrongly, that there was something fishy about the last election, we’ve got a problem,” he said.

In short, Obama is concerned that state-level Republicans are viewing election results as recommendations to be considered, not mandates from the people. And they’re using spurious claims of fraud and new laws to give themselves the ability to reject the will of the people next time it doesn’t suit them.

These issues aren’t new — but are growing more concerning

Cooper mentioned Sarah Palin’s rise as a proto-Trump figure during the 2008 presidential campaign and asked Obama if he anticipated that “spirits that have long been lurking on the edges of the Republican Party” would ever “get this dark.”

Obama said he did not, then ticked through a brief history of how elected Republicans accommodated Trump at every turn — and continue to do so even after he made a desperate attempt to overturn the result of an election he lost fair and square.

One could argue Obama’s surprise at how “dark” the GOP has gotten is naive, especially considering Trump’s rise within the party in 2011 and ’12 was in large part the result of racist conspiracy theories he pushed about Obama’s citizenship. And it’s long been the case that Republicans have used voter suppression laws for partisan advantage by making it harder for Democratic-leaning populations to vote.

But Obama suggested the difference these days is that very few elected Republicans have the courage to stand up to a Republican base poisoned by misinformation from right-wing media, and are more concerned about staying in office than they are standing up for democracy.

“Suddenly, everybody was back in-line,” Obama said, alluding to how some prominent Republicans such as House Minority Leader Kevin McCarthy initially responded to the insurrection by speaking out against Trump before quickly circling the wagons around him. “The reason for that is because the base believed [Trump’s lies]. And the base believed it because this had been told to them not just by the president, but by the media that they watch.”

While there may be no silver bullet solution to the corrosive polarization Obama described, he argued, as he often has, that trying to personally engage with people we disagree with can help reestablish a sense of shared national purpose.

“It probably is not going to be done at the federal level. It’s probably going to involve communities finding ways to rebuild that sense of neighborliness, working together, conversations,” he said.

How does one build a sense of community with someone so deluded by right-wing propaganda that they buy evidence-free conspiracy theories about massive election fraud? It’s a difficult question to deal with, but an urgent one — especially given new federal voting rights legislation looks unlikely to pass before next year’s midterm elections.