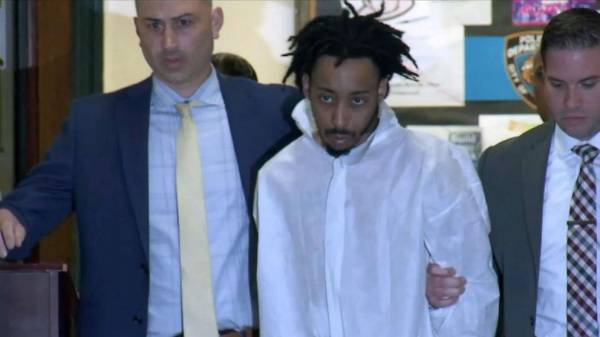 A suspect has been arrested in the fatal shooting of 10-year-old Justin Wallace in New York City, a crime that outraged residents and city leaders, and underscored an alarming spike in gun violence across the nation.

The suspect, identified by the New York Police Department as 29-year-old Javon Young, voluntarily surrendered to authorities Tuesday night, on what would have been Justin’s birthday.

NYPD Commissioner Dermot Shea praised detectives who, he said, worked around the clock on this investigation “tirelessly seeking justice for an innocent 10-year-old boy.”

WABCJovan Young, 29, is walked by police detectives after his arrest, June 8, 2021, on charges related to the shooting death of 10-year-old Justin Wallace in Queen, New York.

Young was arrested on charges of murder, attempted murder, assault and criminal possession of a weapon. He is expected to appear in court for arraignment as early as Wednesday.

The alleged killer appeared stone-faced as two detectives walked him out of a police precinct Tuesday night and placed him in a car to be taken to the city’s central booking facility.

Justin’s death came amid a 70% surge in shootings in New York City in the first five months of 2021, compared with the same period as last year.

At least 131 children 11 years old or younger have died from gun violence this year across the U.S., and another 314 have been injured, according to the Gun Violence Archieve, a website that tracks shootings.

Shannon Stapleton/ReutersA photograph of 10-year-old Justin Wallace, who was shot and killed when a shooter fired rounds at a home in Queens, New York, is displayed as students hang balloons on what would have been his 11th birthday outside the Challenge Preparatory Charter School in New York City, June 8, 2021.

The fifth-grade student was shot around 9:30 p.m. on Saturday at a house in the Far Rockaway section in the city’s Queens borough, police said. Justin and a 29-year-old relative were hit by bullets when a gunman opened fire into the house from the sidewalk, police said.

Police said Young drove up to the home, pulled out a gun and started firing from the bottom of the front stoop as Justin was standing at the front door getting ready to leave the home with his father.

Investigators are probing whether the shooting stemmed from an ongoing dispute, possibly over parking, authorities said.

Justin was shot in the torso and taken to St. John’s Episcopal Hospital, where he was pronounced dead, authorities said. The boy’s uncle was treated for a non-life-threatening bullet wound to the shoulder.

The NYPD released a security video Sunday afternoon that showed a dark-colored SUV driving slowly by the home. Moments later, the gunman, wearing a hooded sweatshirt and mask, is seen walking up to the house and firing up to eight shots from the bottom of the front stoop before running away.

Earlier this week, Mayor de Blasio visited Justin’s parents at their home and vowed that the “cowardly, horrible human being who fired gunshots just randomly into a home” will face justice.

“He will suffer the consequences of what he did,” de Blasio said.