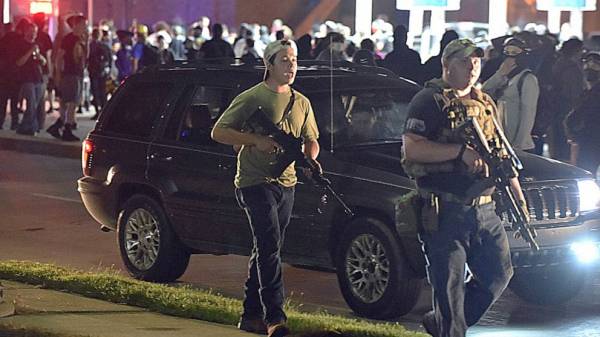 The verdicts in favor of Kyle Rittenhouse and against the men accused of killing Ahmaud Arbery have shone a renewed spotlight on vigilantism and self-defense in America.

While in many respects dramatically different, including their outcomes — Rittenhouse was acquitted and the defendants in the Arbery case were convicted of murder — both high-profile cases center on people who were armed and put themselves into potentially dangerous situations, fatally shooting people in the process and asserting that they did so in self-defense.

According to experts and advocates, the landscape of self-defense laws in recent decades has shifted to a more expansive notion that includes the right not to retreat from danger. The burden of proving self-defense in court has been removed in many jurisdictions, shifting the responsibility to disprove self-defense to the prosecution.

As part of this trend, at least 27 states have passed controversial “stand your ground laws” since the early 1990s, according to the Southern Poverty Law Center.

The SPLC found that these laws “remove the traditional obligation to de-escalate a confrontation and avoid using lethal force in public by stepping away (or ‘retreating’) when it is safe to do so.”

In addition, FBI data shows that the number of rulings of justifiable homicides by private citizens has been on the rise over the past several years. And the rise of vigilantism was the subject of concern voiced by a group of mayors in a letter last September to then-President Donald Trump, who was seen by some as encouraging vigilantism.

“The verdict in [the Rittenhouse] trial gives a green light to people throughout the country who want to bring weapons to protests,” said Rep. Karen Bass, D-Calif., in a statement. “It emboldens vigilantism. Where this jury had an opportunity to address this danger and hold a person who killed two people accountable for his actions, it failed.”

However, other lawmakers believe self-defense legislation should continue to be expanded and are pushing forward bills to do so.

“In these situations, you don’t always have time to decide if you could safely retreat or not,” said Arkansas State Rep. Aaron Pilkington, when presenting a bill in February that would allow an armed person to use deadly force if they believe they are in imminent danger. “That’s why I believe we need the ‘stand your ground’ law.”

Call to defend ‘our lives and property’

Rittenhouse, 18, fatally shot two white men and wounded another with an AR-15-style semi-automatic rifle during anti-police brutality protests in Kenosha, Wisconsin in August.

Days-long protests erupted over the non-fatal police shooting of Jacob Blake, a 29-year-old Black man, prompting an online call for “armed civilians” to defend “our lives and property” after the demonstrations turned violent in the days prior.

Prosecutor Thomas Binger in the Wisconsin case argued in closing statements that Rittenhouse was part of a group of “chaos tourists” and “wannabe soldiers” with no personal connection to the area who were “trying to feed off of what we were going through” in the wake of Blake’s shooting.

Binger also argued that Rittenhouse provoked the situation by bringing a weapon and pointing it at people, enabling him to “hide behind self-defense” and that he had a duty to “exhaust all reasonable means to avoid confrontation.”

But Rittenhouse, who had pleaded not guilty, and his defense team argued that he came there to offer medical aid, was not looking for trouble and that he did not intend to kill the people he shot — only “stop” the threats he faced from the three men.

Rittenhouse testified that one of the men he killed, Joseph Rosenbaum, had lunged for his gun, and the other, Anthony Huber, had chased him down and was attacking him with a skateboard when he too reached for Rittenhouse’s gun.

Gaige Grosskreutz, the third man who Rittenhouse shot and the only survivor, testified about drawing his own pistol on Rittenhouse. Rittenhouse had already shot and killed two people at the protests and Grosskreutz said he “thought the defendant was an active shooter,” a characterization that prosecutors used as well.

Eric Ruben, a professor at Southern Methodist University Dedman School of Law, said that what was crucial for Rittenhouse is that “the time frame for considering self-defense is the time right around the confrontation.”

“The video showed that he was in the midst of a chaotic situation and people were coming at him,” Ruben said.

In addition, in Wisconsin, like most other states in the country, the defendant no longer has to prove self-defense — rather the burden of disproving the argument rests with the prosecution, Ruben said.

“The prosecution has to disprove it beyond a reasonable doubt,” Ruben said. “It hasn’t always been like that. It used to be that defendants in the United States had the burden of proving self-defense.”

Darrell A.H. Miller, a professor at Duke University School of Law, told ABC News that some may find the Rittenhouse verdict to be confirmation “that in those cases in which they perceive that law enforcement is either unwilling or unable to keep the peace, that they are entitled to keep the peace for them.”

He said that the question of “who was the aggressor and who was the defender” in these cases will only get more complicated as more people buy guns and carry those weapons openly.

“It’s really difficult when you have a lot of people with weapons, all perceiving each other as a threat that needs to be curtailed or neutralized — it becomes very, very dangerous for all the people involved,” Miller said.

As for the trial of Travis and Gregory McMichael and William “Roddie” Bryan, experts say Arbery’s death put a spotlight on the intersection of gun violence, self-defense and race.

All three men who had been charged in the death of Ahmaud Arbery were convicted of murder Wednesday in the fatal shooting. They argued in the case that they believed Arbery, who was out jogging, had burglarized a house and decided to follow him in their trucks, chasing him through the neighborhood for an extended period.. They claimed they were going to hold him for police to arrive.

A vague citizen’s arrest statute that the men used to justify their actions was removed from the books by Georgia Gov. Brian Kemp after public outcry in the wake of video of Arbery’s death surfacing. Kemp said Arbery was the victim of “vigilante-style violence” that has “no place” in the state.

“The basis for suspicion: Ahmaud Arbery was jogging,” civil rights leader Rev. Jesse Jackson said about the case in an interview with ABC News’ “Nightline.” “Nothing about him other than his skin color.”

Bryan’s lawyer, Kevin Gough, said his client is “no vigilante” and that he was the only one of the three defendants who was unarmed.

Intersection of race and self-defense in Arbery case

Aside from the purported justification for the defendants’ actions in pursuing Arbery, also at issue is Georgia’s “stand your ground” defense laws, which do not include the need to retreat from danger if it is possible.

Laura Hogue, the defense attorney for Greg McMichael, argued that Arbery decided to “fight,” running at Travis McMichael instead of retreating, and posing a physical threat to McMichael that justified McMichael’s shooting him in alleged self-defense.

Travis McMichael testified that Arbery ran toward him “like a running back,” reached the front of the vehicle and grabbed his gun. He said he feared that Arbery would take the gun from him and would use it against him.

Ruben said that it is “no secret that racial biases exist in the United States and they do intersect with self-defense and gun usage.”

Though all three men have been convicted in this case, a 2017 study by the Marshall Project found that when a white person kills a Black man in the U.S., the killer often faces no legal consequences and it’s more likely to be ruled as justifiable.

Black men are also perceived as larger and more threatening than white men of a similar size, according to research by the American Psychological Association.

“Why is it that [Arbery] needs to submit to private armed parties, as opposed to doing what he might have done which is thought ‘I need to protect myself,’ and that’s why he ends up lunging for the gun?” Miller asked.