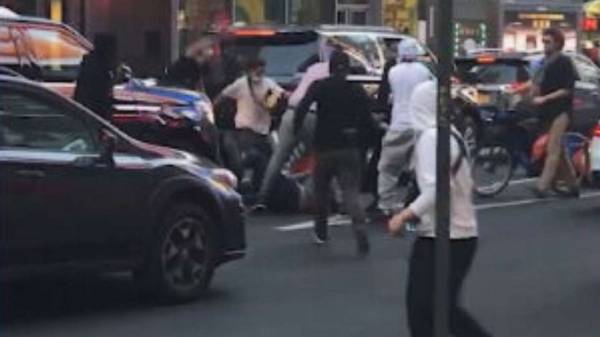 Antisemitism surged across US during Gaza conflict, part of multi-year rise: Advocates

Joseph Borgen, a 29-year-old accountant in New York City, was on his way to a protest after work when he was jumped near Times Square.

“Out of the corner of my eye I saw someone chasing me, with their fist raised back, looking to punch me in the face. Before I could even react … I was surrounded by a whole group,” Borgen told ABC News.

The attackers punched, kicked, pepper-sprayed him and beat him with crutches, the New York Police Department said, leaving him with a concussion and bruising.

Robert Bertrand via Storyful In this screen grab taken from a video, Joseph Borgen is attacked near Times Square, in New York, on May 20, 2021.

“I grabbed my head and neck and my face area and just held onto those areas as tight as I could,” Borgen said of the May 20 attack. “I was getting constantly kicked, punched and hit all over my body. But I was just holding onto my face and head, holding on for dear life, hoping I would survive.”

Borgen, who is Jewish, was wearing a yarmulke and walking to a pro-Israel protest at the time. He said he was called “dirty Jew” and was told “F— Israel, we’re going to kill you” and the NYPD also said his attackers made antisemitic remarks.

Michael M. Santiago/Getty ImagesJoseph Borgen, a recent victim of a hate crime, speaks during a rally denouncing anti-Semitic violence on May 27, 2021, in Cedarhurst, N.Y.

Borgen is just one of many American Jews targeted in recent weeks. Antisemitism, which has been rising in the U.S. in recent years, surged amid May’s deadly 11-day war between Israel and the Palestinian militant group Hamas, advocates say.

In the wake of the conflict, incidents have subsided, but synagogues are focusing on security and some Holocaust survivors, hate crime victims and advocates are calling for change.

On the rise and on edge

During the violence between Israel and Hamas in Gaza — which erupted on May 10 and ended with a cease fire on May 21 — and in the immediate aftermath, antisemitic incidents in the U.S. more than doubled compared to the same time period last year, according to data from the Anti-Defamation League.

The ADL recorded 190 cases of harassment, 50 cases of vandalism and 11 assaults from May 11 through the end of the month.

“Clearly this was triggered by the fighting in the Middle East,” Jonathan Greenblatt, the CEO of the ADL, told ABC News. “Frustration about what was happening in the fighting, a degree of anger … then manifested into frustration and anger being directed at Jewish people here.”

The recent spike is a dramatic reversal of a 14-year downward trend that ended in 2015, according to the ADL.

That changed in 2016, when antisemitic incidents leapt by 34%, according to the ADL. In 2017 — the year of the deadly white supremacist rally in Charlottesville — the U.S. saw an even bigger spike: a 57% increase, according to Greenblatt.

The ADL said 2017 to 2020 were among the highest years on record for antisemitic incidents in the U.S.

Among the most notable events was the October 2018 mass shooting at a Pittsburgh synagogue, where 11 worshipers, including a 97-year-old woman, were gunned down.

Brendan Smialowski/AFP/Getty ImagesPolice tape is viewed around the area, Oct. 28, 2018, outside the Tree of Life Synagogue after a fatal shooting in Pittsburgh, Oct. 27, 2018.

Six months later, a woman was shot and killed at a synagogue in San Diego County, California.

In recent weeks, as the fighting in Gaza intensified, synagogues were vandalized in Illinois, Arizona, California and Utah, and Holocaust museums were defaced in Florida and Alaska.

via StoryfulIn this screen grab taken from a video, assailants attack customers at a restaurant in Los Angeles, May 18, 2021.

Four days after Borgen was attacked near Times Square, a man allegedly punched an older Jewish man in face as he entered a Brooklyn synagogue, the NYPD said. The suspect allegedly yelled, “F—–g Jews! I’m going to f— you up.” A suspect was arrested the next day on a charge of aggravated harassment as a hate crime, police said.

In Los Angeles, police said several Jewish men were outside of a restaurant on May 18 when they were beaten in an alleged hate crime caught on video. Witnesses told ABC Los Angeles station KABC that the attackers yelled antisemitic remarks at the diners outside the Kosher restaurant. Two suspects were arrested, police said.

Marcio Jose Sanchez/AP, FILELos Angeles Mayor Eric Garcetti speaks in front of civic and faith leaders outside City Hall in Los Angeles, on May 20, 2021, calling for peace in the wake of violence in the city that is being investigated as potential hate crimes.

The violence against Jews in recent years and escalating crimes last month have prompted some synagogues to double down on security.

At Mickve Israel in Savannah, Georgia, the third-oldest Jewish congregation in America, security was already a major priority. Mickve Israel conducts active shooter drills for the congregation and its Hebrew school, which the Rabbi, Robert Haas, called a necessity, comparing it to earthquake drills in California.

But after the Pittsburgh and California shootings, the congregation no longer kept its sanctuary doors open once services were underway — an idea Rich said she took from the fortress-like security at European synagogues.

“Our No. 1 vulnerability is those doors, that big entrance, because it’s very, very visible,” Rich told ABC News.

“We don’t want to be scared, but we are on high alert,” Rich said. “[We’re] doing our best as professionals to ensure our congregants can come and feel a sense of sanctity and spirituality.”

The congregation has applied for the federal government’s Nonprofit Security Grant Program, which provides funding for nonprofit organizations at high risk of a terrorist attack.

If Mickve Israel is granted the funding this summer, Rich said they hope to upgrade their security cameras, install bollards outside to deter car attacks and update the security covers over the stained glass in the sanctuary.

Rich said it’s hard on her to constantly be evaluating the synagogue’s vulnerabilities.

“Getting back to a place where we feel so insecure is very, very sad to me,” she said. “We have to invest so much money in security that could be invested in other areas. Social action is a big part of the Jewish community and our congregation … [yet] a lot of money [is] being put into something to prevent something that should never happen.”

In the wake of May’s surge of antisemitic violence, 51 Holocaust survivors who volunteer at the United States Holocaust Memorial Museum joined together to issue a rare statement.

“We cannot remain silent in the wake of the recent antisemitic attacks in cities and towns across the country,” they said in a May 28 open letter to American leaders and citizens. “We know firsthand the danger of unchecked antisemitism.”

“It is deeply painful for us to see our personal history — the systematic destruction of our families and communities and murder of six million Jewish men, women, and children — exploited in this way,” they said.

The ADL is pushing for changes from the federal government. Along with several other Jewish groups, the ADL sent a May 21 letter to Congress and the president urging action including: reestablishing a White House Jewish Liaison position, investing in security upgrades for religious institutions and maintaining an executive order signed in 2019 to combat antisemitism on college campuses.

President Joe Biden has acknowledged the antisemitism surge, vowing in a May 28 statement that the Department of Justice “will be deploying all of the tools at its disposal to combat hate crimes.”

“I will not allow our fellow Americans to be intimidated or attacked because of who they are or the faith they practice,” Biden said.

‘No one should have to look over their shoulder’

“We’ve already seen the [antisemitism incident] numbers recede back to pre-conflict levels,” Greenblatt said this week. “We’re encouraged by that and hope that the numbers continue to go down.”

Borgen said he’d never felt unsafe as a Jewish man before he was attacked.

“I’ve worn kippahs [yarmulkas] publicly … I’ve danced with Torahs in the streets here in the city,” he said. “I’ve never shied away from the fact that I was Jewish.”

Michael M. Santiago/Getty ImagesJoseph Borgen, a recent victim of a hate crime, and his family attend a rally denouncing anti-Semitic violence on May 27, 2021, in Cedarhurst, N.Y.

Borgen said he hopes to see bail laws strengthened for hate crimes, saying, “No one should have to look over their shoulder” due to their religion, race, ethnicity or gender.

Greenblatt, Borgen and Haas all stressed how Jews aren’t the only Americans on edge — hate crimes and harassment against minorities including Asian and Pacific Islanders, Blacks and members of the LGBTQ+ community are still frequent across the U.S.

“The level of hate attacks that’s taken place not only against Jews … it’s very tough to see,” Borgen said, noting that he didn’t think it could happen here “until unfortunately it did.”

Despite his injuries, Borgen said he would not hesitate to go to another pro-Israel rally.

“I’m still wearing my kippah, I’m still going out,” he said. “I’m looking over my shoulder a little bit, but I’m still trying to not let it affect my day-to-day Jewish life.”

Previous : No chance to be children: life in Canada’s residential schools
Next : Jury finds Baylor not responsible for alleged sexual assault by ex-football players