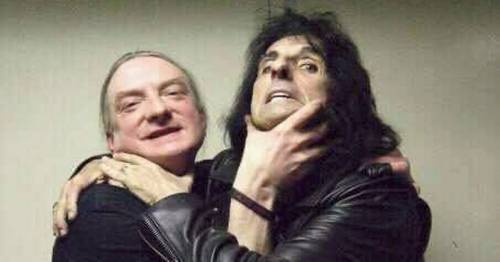 An Alice Cooper superfan has seen his idol so many times he is now friends with the star and his band.

Nick Woodward hangs about with the 74-year-old rocker and goes for meals with his musicians.

He was invited to the wedding of guitarist Michael Bruce, who wrote the hit Schools Out, and Lynette and has met Cooper’s daughter Calico.

Nick said: “The surviving members of the band have become pretty good friends of mine now.

His obsession with the rocker lead to an unexpected friendship
(

“I keep in touch with Michael and his wife, as I do with [drummer] Neal Smith and [bassist] Dennis Dunaway.

“Alice has been a very social amicable gentleman and his wife is nice as well. I have been to the US numerous times to see the original band reunite.

“Those occasions are truly magical. It is strange that childhood heroes became good friends later in life.”

Nick saw Cooper at the First Direct Arena in Leeds this month.

Nick is even close with Alice’s daughter Calico
(

The carpet company manager said: “There appears to be no sign of him slowing down at all. At 74 he is performing as well as 50 years ago.”

He has a collection of memorabilia worth thousands of pounds, including concert programmes, photos, and at least 250 albums or songs.

One other person who is clearly a fan is Claudia Winkleman.

She says she was made up about turning 50 because she will look like the glam rocker.

The Strictly Come Dancing host and mum of three celebrated the milestone in January.

She said: “I love getting older.

"It’s not that I want time to go fast, but I’m absolutely fine with it, and I’ll still look the same.

Previous : Widow gave birth to dead husband’s baby 14 months after he died using frozen embryo
Next : Teenage best friends die in car crash on their way back from day at the seaside