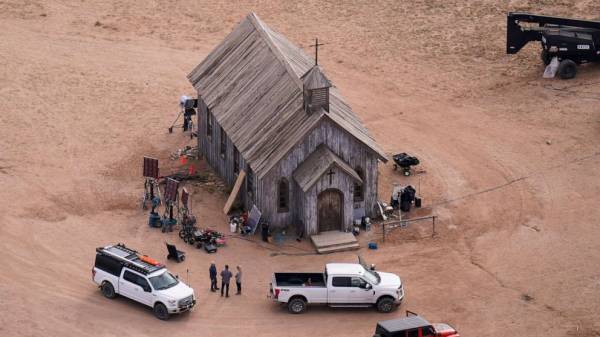 Nearly a month after a magistrate judge approved a search warrant for Alec Baldwin’s cell phone, the actor has yet to comply with the order issued as part of an investigation into an on-set shooting that killed a cinematographer and wounded the director, authorities said.

“To date, the cell phone has not been turned over to authorities,” the Santa Fe County Sheriff’s Office said in a statement issued on Thursday.

Sheriff’s officials in New Mexico also noted that the search warrant for Baldwin’s phone was approved by a Santa Fe County magistrate judge on Dec. 16 and that Baldwin’s attorney acknowledged receipt of the warrant. The Santa Fe County District Attorney’s Office has been negotiating with Baldwin’s lawyer to retrieve the phone and its contents.

“The Sheriff’s Office was advised that, due to jurisdictional concerns, the Santa Fe District Attorney’s Office would be facilitating the retrieval of the phone on a consent basis,” according to the agency’s statement.

Baldwin released a video statement on his Instagram refuting claims that he’s not complying with the warrant.

“Any suggestion that I am not complying with requests or orders, or search warrants about my phone, that’s bullsh–. That’s a lie,” Baldwin said.

He said he and his attorney are following a process required when one state requests information or evidence from a subject who lives in another state.

“It’s a process that takes time. They have to specify what exactly they want. They just can’t go through your phone and take, you know, your photos or your love letters to your wife or whatever,” Baldwin said. “But, of course, we are 1,000% going to comply with all that. We’re, you know, perfectly fine with that.”

The news on Baldwin’s cellphone came as a backstage armorer for the film “Rust” filed a lawsuit alleging the movie’s prop ammunition supplier was the source of a live round loaded in a gun that went off when held by Baldwin, fatally striking cinematographer Halyna Hutchins and wounding director Joel Souza.

The armorer, Hannah Gutierrez-Reed, filed the lawsuit on Wednesday in a New Mexico district court, naming Seth Kenney, the founder and managing member of PDQ Arm & Prop LLC in Albuquerque, as the sole defendant.

Ted Soqui/Sipa USA via AP, FILECandlelight vigil for Halyna Hutchins, who was killed by a prop gun on the movie set of “Rust,” where she was the cinematographer.

In the lawsuit, filed in Bernalillo County Second Judicial District Court, Gutierrez-Reed alleges the live round that killed Hutchins on Oct. 21 and was surgically extracted from Souza’s shoulder came from a box of prop ammunition Kenney supplied to the movie that was clearly marked as inert, dummy rounds.

“The ammunition boxes failed to state a material fact, the contents contained both dummy and live ammunition, which were deceptively sold,” the lawsuit contends.

Gutierrez-Reed, 24, claims she loaded the antique .45-caliber Colt revolver with what she thought were two dummy rounds that came from the box Kenney provided and four others she retrieved from her pocket.

“To the best of Hannah’s knowledge, the gun was now loaded with six dummy rounds,” the lawsuit states. “Hannah relied upon and trusted that defendants would only supply dummy prop ammunition or blanks, and no live rounds were ever to be on set.”

Gutierrez-Reed contends the box of ammunition in question mysteriously showed up on set the morning of the fatal incident.

The lawsuit also contends that the “chaotic nature” on the film set, which included the some members of the film crew abruptly quitting and walking off the job a day before the fatal incident, “created a perfect storm for a safety incident.”

In an interview with ABC News days after the shooting, Kenney denied that the live round and other rounds investigators found on the set came from his company.

“It’s not a possibility that they came from PDQ or from myself personally,” Kenney said. “When we send dummy rounds out, they get individually rattle tested before they get sent out.”

In a new statement to ABC News issued Wednesday after the lawsuit was filed, Kenney said: “Investigators thoroughly examined the PDQ Arms & Prop, LLC inventory and concluded that PDQ’s portion of Dummy Rounds and Blanks supplied to ‘Rust’ were safe.”

“As a result,” the statement continued, ” Seth Kenney and PDQ Arm & Prop, LLC are not of interest in the ongoing investigation.”

In the lawsuit, Gutierrez-Reed also recounts two instances where guns were accidentally discharged on the set prior to the fatal incident. One of the incidents involved the movie’s prop manager, and another involved Baldwin’s stunt double, according to the lawsuit.

The suit contains a heated exchange of text messages between Guiterrez-Reed and Kenney over the misfirings of the guns, in which Gutierrez-Reed suggested reporting the incidents to production officials. In response, Kenney purportedly texted “mistakes happen” and advised Guiterrez not to “push it.”

“Hannah interpreted this as that Seth, who was called the ‘Armorer/Mentor’ in call sheets, wanted to sweep this security incident under the rug,” the lawsuit states.

Meanwhile, a homicide investigation being led by the Santa Fe County Sheriff’s Office is continuing. No criminal charges have been filed.

Guiterrez-Reed’s suit comes weeks after her attorney, Jason Bowles, first suggested in an interview with “Good Morning America” that “sabotage” was involved in the fatal on-set shooting near Santa Fe, New Mexico. He did not cite specific evidence for his claim.

Santa Fe County District Attorney Mary Carmack-Altwies told ABC News in November that investigators have found no evidence that sabotage was involved in the shooting.

In an interview in December with ABC News’ George Stephanopoulos, Baldwin said he had “no idea” how a live bullet got onto the set of “Rust,” a Western he also was producing. He also claimed he “didn’t pull the trigger” on the firearm that killed Hutchins and wounded Souza.

“Someone put a live bullet in a gun,” an emotional Baldwin said, “a bullet that wasn’t even supposed to be on the property.”

Previous : The heat stays on: Earth hits 6th warmest year on record
Next : Driver of school minibus that killed child, 7, ‘wishes they could trade places’