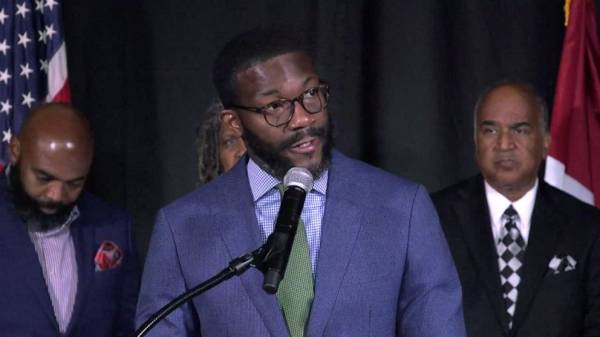 Alabama officials offer $125,000 in rewards for tips in shootings of 5 children

Authorities in Alabama are offering $125,000 for information leading to arrests in five separate shootings of young children.

Six children younger than 10 years old have been shot in Birmingham so far this year, and only one related arrest has been made, Mayor Randall Woodfin said at a press conference.

Five of those shootings took place from February to May, and one resulted in the death of a 2-year-old boy, officials said.

Woodfin, along with city and local faith leaders, announced the $125,000 Gun Violence Against Children Fund on Tuesday — Crime Stoppers will administer the fund and pay $25,000 rewards for tips that lead to arrests in each of the cases.

City of BirminghamBirmingham Mayor Randall Woodfin announces a reward for information leading to the arrests in each of the five unsolved shootings that injured kids this year, June 8, 2021.

Two-year-old Major Turner was shot Feb. 4 when someone opened fire into his home in the Kimbrough Homes Housing Community. He died the following day.

Katrina Grady, mother of the 8-year-old girl, opened up about the terrifying incident at the Tuesday press conference.

She said she pulled over after seeing a vehicle with its airbags deployed on Warrior Road in West Birmingham. As a nurse, she wanted to make sure nobody was hurt. When she approached the car, no one was inside. That’s when she heard neighbors shout, “Get down!”

“When I got down, a vehicle came up the street and started back shooting. … It was a rifle bullet that hit my baby in the head,” Grady said. Her daughter survived.

City of BirminghamKatrina Grady, the mother of the 8-year-old girl who was shot and injured on May 18, opened up on the terrifying incident at the press conference, June 8, 2021, in Birmingham.

“Somebody knows who done this to my child,” she added. “I want justice.”

Since the February shooting of Major Turner, who was killed in one of the city’s public housing sites, the Birmingham Housing Authority has added cameras, flood lights and license plate readers at its 14 communities.