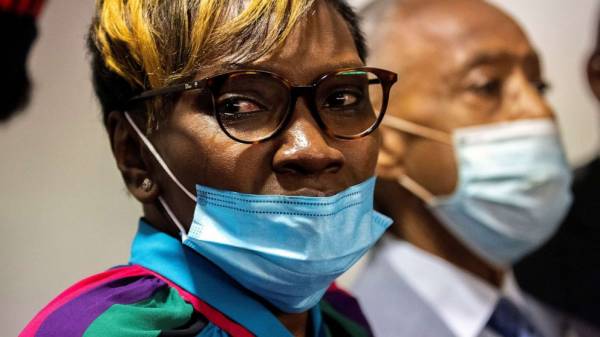 Ahmaud Arbery’s mother said she is feeling especially thankful this Thanksgiving, after three men were found guilty of his murder.

“We finally got justice for Ahmaud,” she added.

Sean Rayford/Getty ImagesAnnie Polite puts on a button for Ahmaud Arbery outside the Glynn County Courthouse as the jury deliberates in the trial of the killers of Ahmaud Arbery in Brunswick, Ga., Nov. 24, 2021.

It’s been nearly two years since the 25-year-old Black man was gunned down while jogging in a mostly white southern Georgia neighbourhood.

On Wednesday, Travis McMichael, who fatally shot Arbery in February 2020, was convicted by a Glynn County jury on all nine charges, including malice murder and four counts of felony murder.

His father, Gregory McMichael, was found not guilty of malice murder but was convicted on all other charges, including four counts of felony murder.

Their neighbor, William “Roddie” Bryan, who recorded the incident on a cellphone, was found guilty on six charges, including three of the felony murder counts.

Marco Bello/ReutersRev. Al Sharpton and Wanda Cooper-Jones, mother of Ahmaud Arbery, raise their hands outside the Glynn County Courthouse after the jury reached a guilty verdict in the trial of William “Roddie” Bryan, Travis McMichael and Gregory McMichael, charged with death of Ahmaud Arbery, in Brunswick, Ga., Nov. 24, 2021.

All three men face up to life in prison.

The jury, comprised of 11 white people and 1 Black person, announced the verdict after 11 hours of deliberations. Cooper-Jones, sitting in the courtroom, wept in relief.

“There’s just really no words to really explain all the emotions that I was going through at that time,” she said.