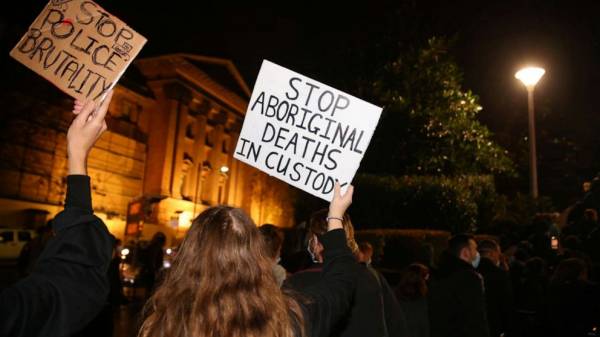 Aboriginal activists in Australia fight back against police brutality

David Dungay Jr. was forcibly removed from his Long Bay jail cell in Sydney in December 2015 because he wouldn’t stop eating biscuits, according to news reports at the time. The 26-year-old was pulled from his cell by five guards and held down by the guards’ hands and knees, as seen in the body camera footage.

His mother, Leetona Dungay, has been fighting for reform since that lead to his death six years ago.

“You can see him … being subdued by police officers, shouting, ‘I can’t breathe, I can’t breathe,'” Leetona said in an interview with ABC News. “He does that more than a dozen times, and it seems to fall on deaf ears. You know, no one really does anything.”

Dungay became unresponsive just minutes after he was apprehended by guards. He was pronounced dead shortly thereafter, according to the Coroner’s Court of New South Wales, which also said he died of cardiac arrhythmia.

Corrective Services New South Wales, which runs the facility Dungay died in, has acknowledged “there were operational practices in use at that time of Mr. Dungay’s death … that may have contributed to his death.”

Lisa Maree Williams/Getty ImagesActivists walk towards The Domain to rally against Aboriginal and Torres Strait Islander deaths in custody, July 5, 2020, in Sydney, Australia.

The agency said it’s since made changes to policy and training procedures, such as developing a new course for officers covering the use of force on inmates.

However, Dungay’s tragic story is just one of many — of Aboriginal Australians in the country’s criminal justice system — Leetona added.

“It’s very devastating for all of us family to hear that cry for mercy,” she continued. “And that cry, cry a slow death, agonizing death. How can they be so cruel?”

She said she hopes that the anti-police brutality movements in the U.S. and subsequent conviction of former police officer Derek Chauvin in the death of George Floyd will encourage others in her fight for justice for Dungay.

“I’m speaking for David — he can’t speak no more. I know he’d want me to continue to keep busy and keep things going — make sure all our people are safe again,” she said.

Indigenous Australians make up just 3% of the population but are about 30% of the prison population, according to the Australian Institute of Criminology, which makes them among the most jailed people in the world.

Don Arnold/Getty ImagesLeetona Dungay and family members deliver a petition to NSW Parliament calling for immediate action and the investigation of Aboriginal deaths in custody including the death of David Dungay Jr on July 28, 2020 in Sydney, Australia.

Between the early 1910s and the 1970s, children of Aboriginal descent were removed from their homes and families by the federal and state government, as well as by churches. The Australian Institute of Aboriginal and Torres Strait Islander Studies reports that these children were adopted by white families or raised in institutions where they were taught to abandon their culture and sometimes their given names.

These children are called the “Stolen Generation.”

“They wanted Australia to be a white Australia. They wanted to breed us out,” said Uncle Widdy, a survivor of the Stolen Generation whose full name is James Michael Welsh.

“I got taken away from my mother with six other brothers and sisters, seven of us altogether, removed from my mother,” he said. “They separated me and my brother from the rest of the family and sent us up to this place that we called the Kinchella Boys Home. It was never a home. It was an evil place.”

Pacific Press/LightRocket via Getty ImagesA protester holds a ‘Black Lives Matter’ and ‘No more deaths in custody’ placards during a demonstration in Brisbane, Australia, June 6, 2020.

Generational trauma and the cycle of poverty, unemployment and discrimination — all of this has impacted the Aboriginal community to this day and can be reflected in the carceral system, according to Sarah Collard, a reporter for NITV. “I don’t know of an indigenous family that hasn’t been impacted in some way by intergenerational trauma. Education is not nearly as high, unemployment, poverty and suicide. … These are all issues that many indigenous families grapple with.”

Widdy said his trauma led to into alcoholism and run-ins with the law. Now, 10 years sober, he’s working on breaking that cycle.

The Australian government has acknowledged the plight of Indigenous Australians.

In 2008, former Prime Minister Kevin Rudd made a landmark speech called the National Apology to Australia’s Indigenous Peoples. It included an apology to the Stolen Generations, and is now considered a defining moment in the country’s history.

When asked why it took so long to apologize, Rudd told ABC News’ Britt Clennett that it can be hard for people in power to take responsibility.

Some 13 years later, Rudd said there’s still significant much work to do — at all levels — to prevent deaths in custody.

“When we look at incarceration rates for Aboriginal people, which are abominably high, there’s a sequence of events, poor health to start with. Poor education leads to poor employment, leads to people living a life of petty crime,” Rudd said. “This is intensified in Indigenous Australia.”