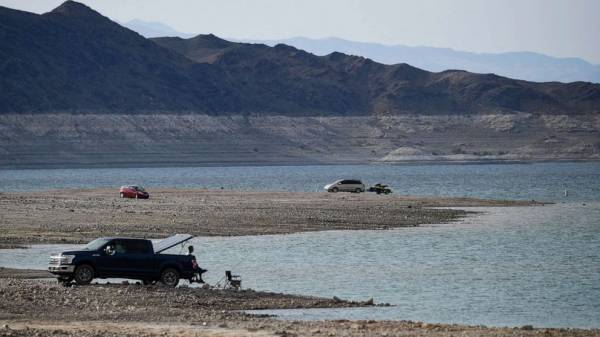 A ghastly effect of drought, bodies are emerging in Lake Mead

As the water level of the nation’s largest man-made reservoir keeps receding due to drought, human bodies keep emerging.

For the second time in seven days, human remains have been discovered in Lake Mead near Las Vegas.

U.S. National Park Service rangers said human skeletal remains were found about 2 p.m. Saturday at Lake Mead near Callville Bay. The Clark County Medical Examiner collected the remains and is working to identify the person and determine a cause of death.

The discovery came a week after the decayed body of a man was found stuffed in a steel barrel near the reservoir’s Hemenway Fishing Pier, more than 20 miles from Callville, according to the Las Vegas Metropolitan Police Department.

Patrick T. Fallon/AFP via Getty ImagesA rusted metal barrel, near the location of where a different barrel was found containing a human body, sits exposed on shore during low water levels due to the western drought at the Lake Mead Marina on the Colorado River in Boulder City, Nevada on May 5, 2022.

“We believe this is a homicide as a result of a gunshot wound,” Lt. Ray Spencer, head of the LVMPD’s homicide section, said of the body found on May 1.

Spencer said the Clark County Medical Examiner is attempting to identify the body. He said detectives believe the man was killed in the mid-1970s to early 1980s based on his clothing and footwear.

In regards to the second body found on Saturday, LVMPD officials said Monday they have found no evidence to suggest foul play.

Saturday’s discovery of skeletal remains was made by two sisters, Lindsey and Lynette Melvin, who said they were paddle-boarding on the lake because the water was too shallow to go snorkeling.

The sisters told ABC affiliate station KTNV in Las Vegas that they found the skeletal remains when they stopped to explore a sand bar they said used to be underwater before a prolonged drought dropped the water table to historic record lows.

At first, the sister thought it was the remains of a big horn sheep. Then they discovered a human jawbone with teeth still attached and reported them to National Park Service rangers.

“We just really hope that the family of that person finally gets answers and hope their soul is laid to rest peacefully,” Lynette Melvin said.

Patrick T. Fallon/AFP via Getty ImagesPeople recreate on the shore during low water levels due to the western drought at the Lake Mead Marina on the Colorado River in Boulder City, Nevada on May 5, 2022.

The sisters said they grew up in Las Vegas and have heard rumors of Mafia hitmen dumping bodies in the lake.

Geoff Schumacher, a mob historian and vice president of exhibits and programs at the Mob Museum in Las Vegas, told ABC News on Monday that the discoveries of the bodies, especially the man found in the barrel, have reignited those rumors.

“Certainly, Las Vegas has a history with the mob and there have been people who have gone missing in this area over the years that may have been the victims of mob violence. But I don’t recall a case where we had anything like this where we found a body in a barrel that popped up in Lake Mead,” Schumacher said.

Schumacher said disposing of a body in a barrel is a classic mob technique dating back to the 1880s.

He said one famous case was that of Chicago gangster John “Handsome Johnny” Roselli, who helped the mob control Hollywood and the Las Vegas Strip. Roselli disappeared after testifying in 1975 before the U.S. Senate Select Committee on Intelligence about an alleged conspiracy to assassinate President John F. Kennedy.

Roselli’s decomposing remains were discovered in 1976 stuffed inside a 55-gallon steel barrel a fisherman found floating in Dumfoundling Bay near Miami. An autopsy determined Roselli died of asphyxiation.

Noting that police suspect the slain man found in a barrel in Lake Mead this month may have been killed in the 1970s or 1980s based on his clothing and shoes, Schumacher said the mob was prominent in Las Vegas during that time frame.

“There was a lot of conflict and I would not at all be surprised to find that was the victim of mob violence,” Schumacher said.

He said that as the reservoir, which is formed by Hoover Dam on the Colorado River, continues to recede, more shocking discoveries are likely to emerge, including the wreckage of a B-29 bomber that crashed in the lake in 1947.

“There’s probably a whole bunch of sunken boats out there, too,” Schumacher said. “Who knows what other stuff people have thrown out into the water over the years, physical objects as well as bodies.”

Previous : Woman ‘blackmailed’ with £170 parking fine at Iceland despite putting £1 in meter
Next : Wind is wild card in fires burning in New Mexico, Arizona