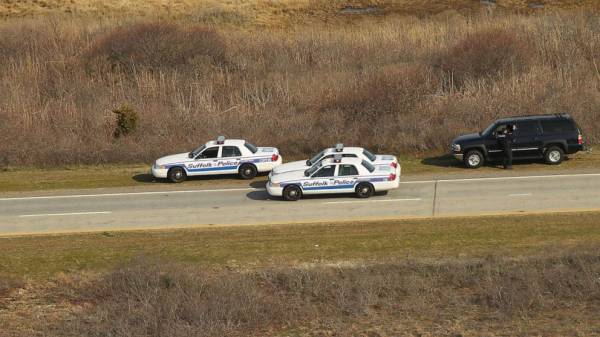 Police are thinking differently about the undetermined death of a woman previously thought to have been killed in a rash of prostitute murders on Long Island, New York.

Suffolk County police on Friday released three 911 calls made on May 1, 2010, the day Shannan Gilbert, a sex worker, vanished near Oak Beach.

Gilbert’s cause of death is undetermined and was most likely an accident, police said.

Spencer Platt/Getty Images, FILEAn aerial view of police cars near where a body was discovered in the area near Gilgo Beach and Ocean Parkway on Long Island, April 15, 2011, in Wantagh, New York.

In the early hours of May 1, 2010, Gilbert was driven from New York City to Oak Beach to meet a client, Joseph Brewer, police said.

“Gilbert’s driver remained in the area while she met with Brewer,” police said in a statement. “During the meeting, Gilbert reportedly began acting irrational, prompting her client to contact the driver to have Gilbert leave his home.”

Gilbert called 911 from Brewer’s house. Police noted that at times on the call Gilbert spoke calmly but slurred her words. At other points on the call she was non-responsive, and at other points she screamed, police said. She told the operator, “There’s somebody after me.”

Gilbert eventually left Brewer’s home and ran to the house of another resident, who called 911. The third 911 call was made by another resident when Gilbert knocked on her door.

Brewer and Gilbert’s driver have been cleared of any criminal involvement in her death, police said.

However, Gilbert’s family hired a private pathologist to conduct an autopsy; while that pathologist determined there’s insufficient information to determine a definite cause of death, he found her death is consistent with homicidal strangulation, police said.

Harrison told reporters, “Shannan was a loving daughter, sister and a young woman who should have had a whole life ahead of her, regardless of the circumstances surrounding her death. Her unfortunate passing is tragic.”

Police said they are “committed to evaluating any information or evidence that the public may have to help determine a definitive cause of death.”

The investigation into the unsolved Gilgo Beach murders started more than 11 years ago when Suffolk County police, searching for Gilbert, discovered the body of Melissa Barthelemy along Ocean Parkway. The remains of 10 people were found in 2010 and 2011 in the weedy sections off Ocean Parkway near Jones Beach. At the time, police said half of the identified victims worked as prostitutes.

A $50,000 reward is available for information leading to an arrest in the Gilgo Beach murders.