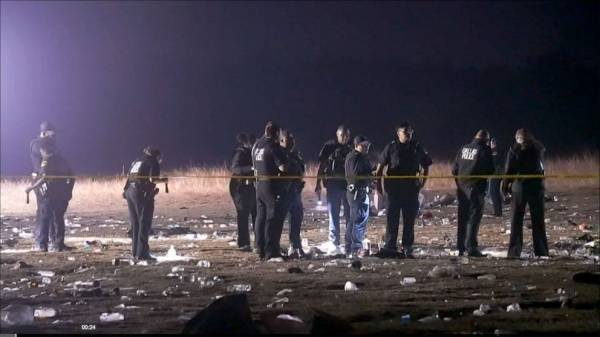 Two suspected gunmen were arrested in connection with a mass shooting at a concert in Dallas last month that left one man dead and 16 people injured, including three juveniles, police said Thursday.

The suspects were identified as Astonial Calhoun, 25, and Devojiea Givens, 26, according to police. They were arrested Wednesday by Dallas police, the U.S. Marshals Service North Texas Fugitive Task Force and the federal Bureau of Alcohol, Tobacco, Firearms and Explosives Crime Task Force, officials said.

Both men were charged with felony deadly conduct and were being held Thursday at the Dallas County Jail, pending an arraignment, according to the Dallas Police Department.

The investigation is ongoing and detectives are working to identify other suspects they allege fired weapons, as well as those involved in the fight that preceded the shooting, police said.

Attorney information for the two men arrested was not immediately available.

Police asked that anyone with video footage or photos of the fight and shooting to download them to the police department’s evidence collection online portal.

The shooting broke out at about 12:13 a.m. on April 3. A flyer for the outdoor concert and trail ride said horses and ATVs were welcomed and children aged 10 and under were to be admitted for free.

WFAAA police vehicle blocks an entrance to the music venue that was the scene of multiple shootings in Dallas, April 3, 2022.

A witness told ABC affiliate station WFAA in Dallas that the event was “jam-packed” with people and described a chaotic scene as gunfire prompted concert goers to run in all directions seeking cover and preventing police and emergency vehicle from quickly entering the scene to treat victims.

Police said the organizers of the concert that drew about 2,000 people did not have a permit to hold the event or an emergency plan.

The event’s organizer, Germaud Lyons, who goes by the nickname Bossman Bubba, said in a statement on Facebook April 3 that he was saddened by the shooting and blamed the incident on a higher than expected turnout.

“We took the necessary steps to offer safety by having Dallas Police officers and security personnel on scene. Additionally, emergency officers and vehicles were on standby. However, some things were still out of our control,” the statement said.

The person killed was identified by police as 26-year-old Kealon Dejuane Gilmore. Police said Gilmore was found lying near the stage with a gunshot wound to the head and was pronounced dead at the scene.

Sixteen other people were injured in the shooting and taken to hospitals in private vehicles or by ambulances, police said.