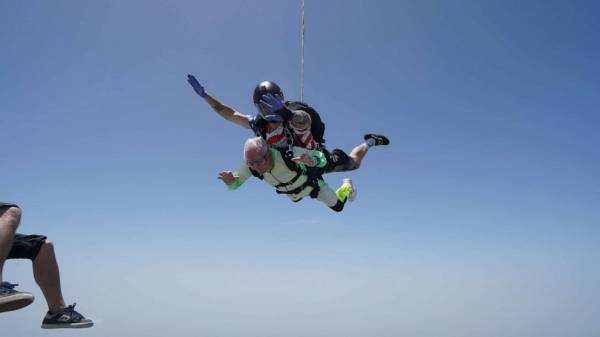 Al Blaschke has survived the coronavirus, the Great Depression and the Spanish flu. Now, at 103 years old, he’s become the oldest person in the world to do a tandem jump out of an airplane.

“I never thought I would be around this long,” he told ABC News.

Blaschke made his Guinness World Records-breaking, 14,000-foot jump on Thursday. His grandsons, who’d recently graduated from college, joined him in taking the leap.

“It was awesome to be able to jump out of an airplane with my grandpa,” his grandson, Kevin Blaschke, told ABC News. “Him breaking the world record is icing on the cake.”

The retired craftsman, who built aircraft parts during World War II, broke the record just three years after skydiving for the first time on his 100th birthday. It was an experience he said he’d planned since someone gave him the idea to go skydiving three years earlier.

“He came in and we saw that, amazingly, he was in great shape for a 100-year-old,” said Wendy Faulkner, an instructor at Skydive Temple in Saledo, Texas, who helped organize the jump for his 100th birthday.

When a friend brought up the idea of skydiving, he said he would wait until he turned 100, she said.

After the jump in 2017, he told Austin ABC affiliate KVUE that he wished the experience jumping from 10,000 feet would have lasted longer.

“It was too short,” he said at the time. “I saw more than I thought I would with my eyes.”

Previous : New way to calculate dogs’ ages may unlock secret to aging
Next : US-Russia-China Arms Race Would Be Destabilising, Detrimental for All, State Department Says