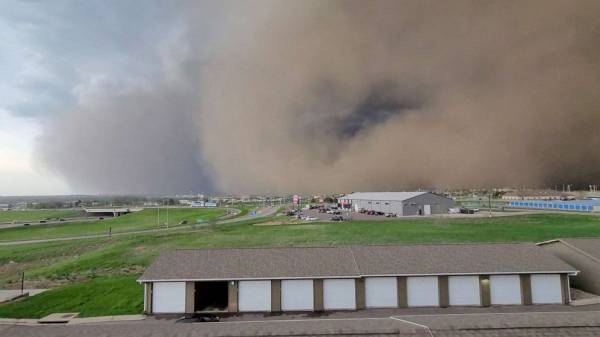 A storm system that caused damage in South Dakota and Minnesota Thursday is moving east into the Great Lakes and the Mississippi River valley on Friday.

Damaging winds are expected Friday from Michigan to Oklahoma, including Green Bay and Oklahoma City, just north of St. Louis.

The severe storms across the Heartland brought more than 330 damaging storm reports from Kansas to Minnesota, including three reported tornadoes on Thursday.

Severe storms brought wind gusts of up to 107 miles per hour in South Dakota flipping cars, semis and uprooting trees.

Flash flooding was reported in parts of Minnesota, where 4 to 5 inches of rain fell in a matter of hours.

Meanwhile, record heat is hitting various parts of the country

Traverse City, Michigan, hit an all-time record high for May of 96 degrees. Madison, Wisconsin, reached 94 degrees, making it the third day in a row of 90s, which has never happened before this early in the season.

Jerilee Bennett/The Gazette via APThe Akerman fire threatens homes in Colorado Springs, Colo., May 12, 2022. The fire was one of numerous fires in the Pikes Peak region.

Heat is expected Friday in the same area as well as up into the Great Lakes and northern New England. Record high temperatures are expected to last into the weekend, with highs reaching the 90s in Bangor, Maine.

Warm temperatures in the 80s are also expected in Boston and Philadelphia over the weekend.

Fire danger persists in other parts of the country

A red flag warning is in place in Colorado, where there is wildfire danger.

A bush fire ignited near Colorado Spring, prompting evacuations, and people at Colorado Springs airport had to shelter in place. The fire has burned 182 acres and is 18% contained.

Gusty winds are expected on Friday for Colorado all the way to North Dakota. Some areas could gust as high as 65 miles per hour with the highest winds in North Dakota.