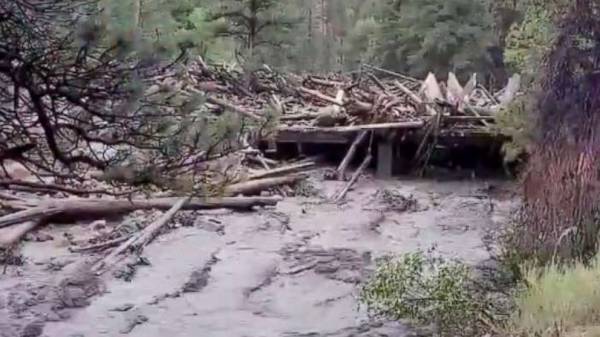 One woman is dead and two adults are missing in the wake of a devastating flash flood and mudslide in Colorado, authorities said.

The flooding in the Poudre Canyon in Larimer County, about 100 miles north of Denver, was reported at about 4:45 p.m. Tuesday, the Larimer County Sheriff’s Office said.

A mudslide around 6 p.m. sent debris flowing into the canyon, destroying at least five structures and damaging the road, the sheriff’s office said.

Evacuations were ordered around 7:45 p.m. The evacuation mandate was lifted later in the night.

Search operations are ongoing Wednesday by foot and drone. Divers will try to recover the victim as well as a car in the river, the sheriff’s office said.

And the danger isn’t over — the flash flood threat will remain through the week.

“We ask that residents remain alert to the weather conditions in the event additional evacuations may be necessary,” the sheriff’s office said.

Larimer CountyReports of flooding in the Poudre Canyon between Cameron Pass and Ted’s Place in Colorado were received by Larimer County officials, July 20, 2021.