Paranoia about cheating is making online education terrible for everyone 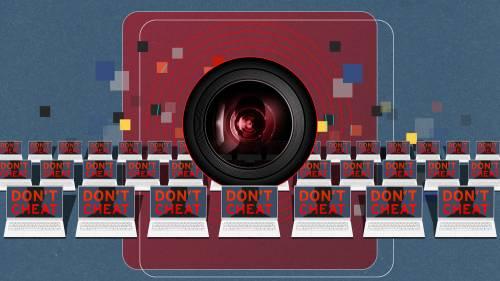 When student Marium Raza learned that her online biochemistry exam at the University of Washington would have a digital proctor, she wanted to do her research. The system, provided by a service called Proctorio, would rely on artificial intelligence and a webcam to monitor her while she worked. In other words, as tests must happen remotely in the Covid-19 crisis, Raza’s school is one of many using a mixture of robots and video feeds to make sure students don’t cheat.

“We don’t have any transparency about how our recorded video is going to be used or who is going to see it,” Raza told Recode. “The status quo should not be visualizing each student as someone who is trying to cheat in any way possible.”

Raza wasn’t the only one in her class who felt concerned about new levels of surveillance. Another student in the class, who did not want to be named, said that in addition to privacy worries, they were concerned that they didn’t even have enough RAM to run the Proctorio software. Worse, the tool’s facial detection algorithm seemed to struggle to recognize them, so they needed to sit in the full light of the window to better expose the contours of their face, in their view an indication that the system might be biased.

When a practice run with the software ultimately failed, Raza said students took the exam online without Proctorio’s monitoring. Given the remote instruction required by the Covid-19 crisis, the University of Washington had signed a six-month contract with Proctorio only a few weeks before this biochemistry exam. University of Washington spokesperson Victor Balta told Recode the software has not yet been widely used by professors.

Still, these students’ experiences are another sign that, amid the pandemic, the hurried move to re-create in-person classes online has been far from smooth, especially when it comes to testing. As professors have tried to balance a desire to keep students learning, some institutions have gone to great lengths to catch students cheating during the quick adjustment to remote instruction.

Many of these tactics are short-term solutions, but they demonstrate that the bumpy move to online education — a transition that started long before the pandemic hit — requires increased digital surveillance of students to replicate old testing norms. That, or schools will have to come up with different ways to measure learning.

Student surveillance is on the rise as tests move online

In recent weeks, teachers of all education levels have been trying to figure out how to grade their students. College professors, in particular, have moved large classes online, sometimes to reach a hundred or more students across the country or even the world. Some professors say they’ve lowered their expectations for their students’ work, and many have switched to pass-fail grades or adjusted their exam processes.

The switch to online learning has also left many universities leaning more heavily on existing learning management platforms, such as Blackboard and Canvas, where they can post assignments, online discussions, and resources. Instructors have turned to video conferencing to host classes and lectures. Meanwhile, some students and even some instructors simply don’t have the appropriate devices or the internet connection to make online courses work.

Still, as more aspects of education have moved online, some professors have remained committed to one classroom staple: the timed, closed-book exam. But unable to have a teacher’s assistant strolling around a classroom to make sure students aren’t cheating, instructors are turning to remote proctoring services like Proctorio as well as competitors Examity, Honorlock, and ProctorU.

Some of these tools include a human component. Examity, the subject of a recent Verge investigation, has remote proctors who watch students via webcam while they take exams and look for signs of cheating. These human proctors might also ask that students show ID or put away their phones. Some students are quick to brag about ways to trick these proctors in these scenarios. (More on that in a second.)

But there are varying levels of automation, as well. For instance, Examity also uses AI to verify students’ identities, analyze their keystrokes, and, of course, ensure they’re not cheating. Proctorio uses artificial intelligence to conduct gaze detection, which tracks whether a student is looking away from their screens. The company founder and CEO Mike Olsen, apparently bullish about the service’s automated nature, told Recode in an email that the company has fewer than 100 employees and doesn’t need “humans in call centers.”

Though they’ve seen a surge during the pandemic, none of these companies is particularly new. Whereas Examity and Proctorio were founded in 2013, ProctorU has been around since 2008. Before the novel coronavirus, these companies marketed their services to both online and traditional universities. And with the huge growth of online education — the industry is expected to grow from being a $4 billion market in 2019 to a nearly $21 billion market in 2023 — they have been successful. After raising $90 million last year, Examity reported that its exam monitoring services were used by more than 500 colleges and employers.

Demand has surged in recent weeks for obvious reasons. Proctorio’s Olsen told Recode that in the last month, the company has administered 2.5 million exams — a 900 percent increase from the same period last year — and he anticipates many more as finals season approaches.

Some students seem to hate these services, and social media is chock-full of their grievances, from criticisms of the software to objections that the tool is just plain annoying. And some, such as Raza, have turned to their campus newspapers to express their privacy objections. Earlier this year, students at Florida State University started an online petition to protest their school’s use of Honorlock, and over 5,500 have signed it so far. The University of California Berkeley has already banned online exam proctoring, with some students saying they may not have the high-speed internet connection or living situation to make remote exams happen effectively and equitably.

These services are not perfect, and it’s easy to find online tips and tricks for duping remote proctoring services. Some suggest hiding notes underneath the view of the camera or setting up a secret laptop. It’s also easy for these remote proctoring services to find out about these cheating methods, so they’re constantly coming up with countermeasures. On its website, Proctorio even has a job listing for a “professional cheater” to test its system. The contract position pays between $10,000 and $20,000 a year.

But the potential for deception doesn’t stop with remote proctoring.

“With the rapid shift to online, we can’t watch students as they do their work in the same way that we might have in the past,” said Phillip Dawson, a researcher who studies cheating at Australia’s Deakin University. “We’ll see different kinds of cheating.”

On the extreme end, Dawson suggests someone could be paid to take an entire course on behalf of another student and the professor would never know. A version of this is already happening. After stay-at-home orders left China locked down in the pandemic, some students paid firms to finish their semesters online for them, according to Quartz.

Students have long used the internet to buy essays online, and this trend might evolve in the future. As Dawson explains, new technology allows students to automatically paraphrase other people’s work. This might make it harder for an instructor to spot plagiarism. Spinbot, for example, is a simple service that “spins” or rewrites chunks of text. Students could also plug a paragraph of English text into Google Translate, translate it into another language, and then translate it back into English to get a version that looks different from the original. Students might even try using an AI-based writing tool to help them finish texts, such as the Talk to Transformer tool, which is built on a language model from the research laboratory Open AI.

All these cheating innovations likely mean more demand for even better software to catch these students. These programs include services, like LockDown Browser, that prevent students from using other applications during an exam or class, as well as anti-plagiarism tools like Turnitin.

This could be a chance to change how higher education works

Probably unfortunately, many students’ and teachers’ first introduction to online learning has been rushed and insufficiently prepared. Some students, already burdened by the anxiety and fears of living through a pandemic, suffer from the digital divide. Teachers, many untrained in online learning, are struggling to manage classes at home while they juggle their own responsibilities and families. But experts say that what’s happening now probably doesn’t represent the future of online education.

“Our new normal might not be that everything’s online,” says Ryan Baker, a professor of education at the University of Pennsylvania. “But it might be that a third of things are online, and that might feel like a normal thing after a year.”

Marium Raza, the University of Washington student, said any form of webcam-based monitoring makes her uncomfortable. Moving forward, she would prefer that schools have a bit more trust in students.

“Students should be able to consent to using or not using a software without having it impact their educational experience,” Raza argues. “But more than that, I think the whole process should be democratized a little bit, and students should be involved in the decision-making.”

The shift to online learning is inevitably changing views not just on cheating but also on what it really means to test students’ knowledge. Some professors are looking for other ways to measure learning, arguing that assessments online don’t necessarily need to be traditional exams.

Even before the pandemic, some professors were arguing that “attempting to replicate in-person teaching online” with online proctoring doesn’t actually work. As Douglas Harrison, a vice president and dean at the University of Maryland’s global campus, recently argued, the pandemic should push instructors toward assignments that might make cheating less likely and make assignments more meaningful, perhaps through case studies or scenario-based learning.

Baker is an advocate of adaptive learning, which can use algorithms to adapt lessons to individual students, as well as other computer-based learning tools. For instance, he’s now adjusting one of his fall courses, which might be online, to make use of a mathematics platform called Assistments, which allows students to receive automatic feedback on their answers and gives teachers analytics about what kinds of mistakes students are making.

Ultimately, he says the current period will allow us to learn what kind of education works online and what doesn’t.

Open Sourced is made possible by Omidyar Network. All Open Sourced content is editorially independent and produced by our journalists.

Previous : Sweden’s Semi-Lockdown: A Middle Way That Won’t Crash Their Economy
Next : US Funding Cut Will Not Bring ‘Irreparable Damage’ to WHO – Moscow