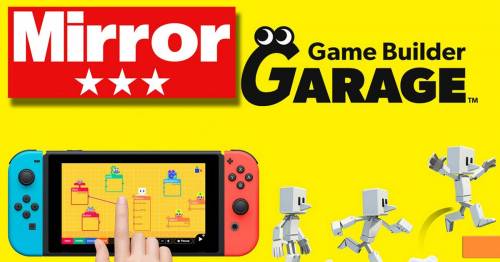 Game Builder Garage review: Teaching you how to build, experiment and play your own video games – James Ide

Creating video games is a daunting task that most of us would love to do but few can actually achieve due to the complexity of programming.

Thankfully, Nintendo has made this dream a reality with Game Builder Garage. Borrowing many key concepts from Super Mario Maker and Nintendo LABO, Game Builder attempts to make programming easy to understand and fun.

Game Builder Garage is a tool that aims to teach you how to make various types of simple games without having to use coding.

The world of GBG is vibrant and colourful, especially in the Program Screen as this helps you place programming elements called Nodon and makes it easier to recognise them at a glance. 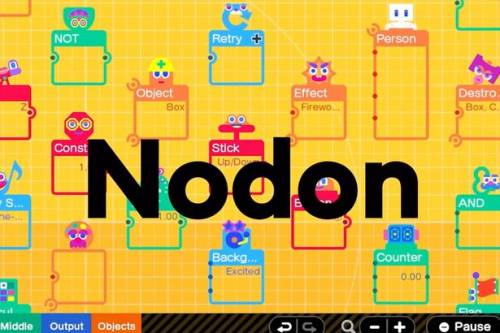 The game offers a staggering amount of possibilities
(Image: Nintendo)

The Program Screen is a workspace where you place your Nodon and connect them, it can become messy very quickly.

You can play in both handheld and docked mode so you can continue working on your game even while out and about.

Making use of the touch screen when in handheld mode feels great especially when you connect the Nodon together or drag them into the right spot.

While playing in docked on the TV makes it much easier to see, it is harder to use without the Switch’s touch controls. Despite this, the game is surprisingly compatible with a standard USB mouse making it easier to control.

While working on your creations you can quickly transition from the Nodon-filled Program Space but to the Game Screen and try out your game in real-time. 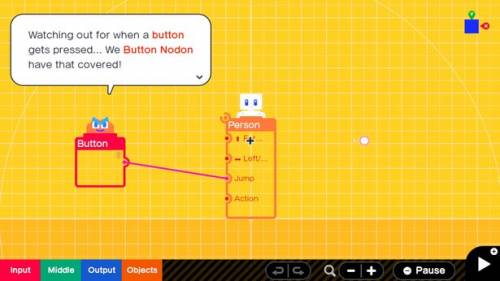 Through connecting Nodon you can determine their action
(Image: Nintendo)

Nodons are the stars of the show and the building blocks of your game, working together behind the scenes to make it all run. There are over 80 individual Nodons and each one represents one of the many tools that you’ll need to create your games.

They all have a unique design that relates to their function that helps make each one memorable.

They also each have a personality that relates to their purpose This will also affect how they interact with you and each other as the way they communicate often emphasizes their particular roles.

For example, the undo button is a wistful character who longs for a “do-over” while the button Nodon is hyperactive. While on the Game screen your Nodon are nowhere to be seen except for any objects and characters in that scene. 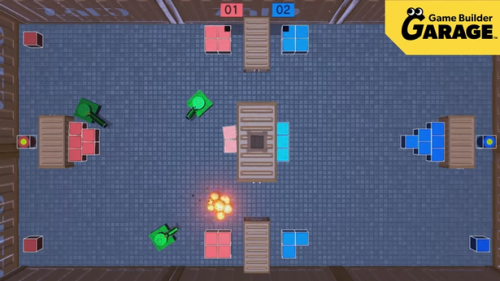 Create all kinds of crazy games then share them with friends
(Image: Nintendo)

Nodon are organised into 4 subcategories

Input covers stuff like your button presses allowing you to jump and move or utilising the touch screen.

Middle works out various things like calculations and timers etc.

Object is basically the physical objects of the game world like an apple, box, or enemies.

And you connect them together in order to make them operate and alter the parameters of the game.

From the menu, you have the Interactive Lessons designed to teach you how Game Builder Garage works. Each lesson builds on what you learnt in the last session and introduces new elements. There is also a Free Programming mode that you don’t have access to until you have completed all the lessons. 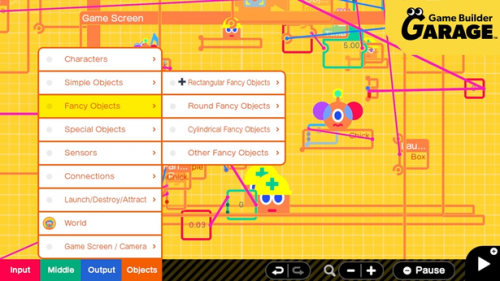 While it looks overwhelming at first, the Nodons will take you through building a masterpiece step by step
(Image: Nintendo)

Once you begin, your guides are two glowing fairy-like dots named Bob and Alice. I thought they would come across as annoying, but I was surprised at how endearing they are. The pair guide you through how to use the Nodon in the Interactive Lessons.

There are seven interactive lessons that teach you how to make different types of games. 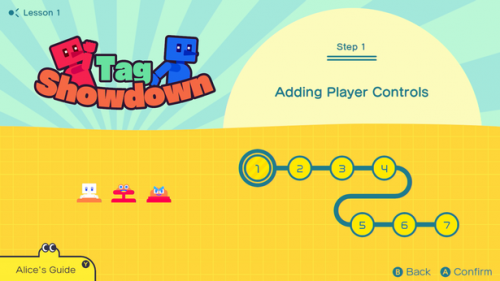 The tutorials are short and well-paced but they offer little freedom
(Image: Nintendo)

They are further broken down into around 15-minute tutorials that train you on how the game works and introduce you to new Nodon.

While coming across as funny and well written, they also feel a bit rigid and can really drag on considering how much information they dump on you. The games you create are Tag Showdown, On a Roll, Mystery Room, Thrill Racer, and the best-named lesson ever, Super Person World.

These lessons don’t offer much in the way of experimentation as you just copy what you have been shown, which isn’t the best way for everyone to learn.

After each lesson, you go over what you have learnt in Checkpoint, and before you can continue you must then complete a simple puzzle which is usually a game missing some function that you’ve just been taught. 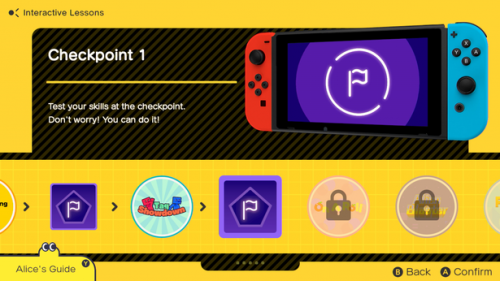 While building your game you can switch over to the Game Screen mode to quickly try out any changes or amendments made, which I used constantly and found very helpful, much like in Super Mario Maker 2.

Once you’ve completed the Interactive Lessons you are finally let loose to create whatever you like in Free Programming mode.

You’d be surprised how quickly a remarkably simple game when viewed in the Program Screen becomes a huge and elaborate mosaic of Nodon.

In Free Programming you can add some personalisation by customising backgrounds, music, and even drawing you oown textures which really helps bring creations to life.

You can edit textures with an MS Paint style tool which, despite its limited options, can make projects look great when you take the time to draw. 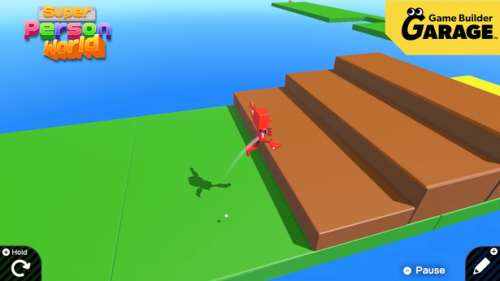 Because there is no model editor everything can look generic
(Image: Nintendo)

It’ll be fascinating when the community get hold of this game and start pushing the limits of what it can do.

But you cannot browse created games like in Super Mario Maker 2. Instead, you have to actively choose to download someone’s game so you are unlikely to see anything you shouldn’t.

Game Builder Garage feels like an evolution of LABO Toy-Con Garage, but with much better visuals and an easier to use interface.

Game Builder Garage attempts to turn a scary and complex task like programming into something easy and fun with its simple mechanics, clever design and bags of personality.

While it can feel frustratingly restrictive at times (especially in the beginning) and the tutorials don’t so much hand hold but grab on tight with no intention of letting you go, they do make it a playful and charming experience.

The Nodon are a likeable and ingenious idea to help understand the various programming functions and let you play with a wide array of tools, but there are so many it becomes difficult to keep track of them.

Game Builder Garage has some obvious limitations as it can only really create basic games, but as the first step to inspiring the next generation of programmers, it’s an invaluable tool and oodles of fun.

Previous : Universal Basic Income trial would give 5,000 people £213 a week to live on
Next : Dad of record-breaking 10 babies is ‘love cheat’ and ‘married to another woman’ – World News