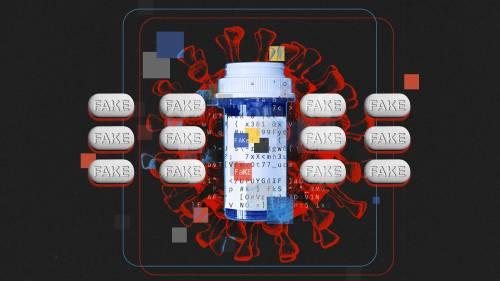 For years, Timothy Mackey has been researching the sale of opioids and illicit drugs online, tracking how dealers have used social media to push controlled substances. But over the past few weeks, the UC San Diego public health researcher has found himself in the bowels of the internet, trying to track the black market for fake Covid-19 tests and treatments. It turns out the two realms of drug-dealing share some similar scams.

The coronavirus pandemic has fueled demand for a wide variety of products, including some that aren’t readily available to the general American public, like at-home testing kits. Other things, like government-approved, proven Covid-19 treatments or cures, don’t yet exist. But online opportunists are working hard to take advantage of the public’s desperation, selling counterfeits on social media platforms, e-commerce marketplaces, and the dark web.

Mackey told Recode that, even as a public health expert, he’s had trouble quickly differentiating between legitimate and illegitimate products online. That’s partially because news about the Covid-19 pandemic moves so quickly that information about a legitimate product or trial in one country can quickly inspire fake and unapproved products in another.

“Every week there’s a new product or a new scam going on,” Mackey says. The problem is so pervasive that someone even reached out to him (on LinkedIn, of all places) offering to sell him seemingly fake, rapid test kits in bulk.

A fake Covid-19 testing kit is more dangerous than a fake Chanel bag. A counterfeit test could lead someone to believe they’re negative when they’ve been infected. A fake cure could leave someone worse off than before, and possibly dead. Even a phony N95 mask might mislead a doctor into believing they’re protected in a hospital full of Covid-19 patients, where faulty equipment can lead to more spreading of the virus.

There’s no proven treatment for Covid-19, but plenty of social media accounts are nevertheless illegally pushing so-called cures or treatments. Online, you can find people advertising drugs that are undergoing clinical trials but are not yet approved to treat Covid-19, like chloroquine, as well as more far-out fake treatments involving cow urine, colloidal silver, and even oregano.

Platforms like Instagram and Twitter have banned advertisements for these products, but enforcing those bans seems to be an ongoing challenge. After a few minutes of browsing, we were able to find several posts advertising Covid-19 medications and treatment, an outcome that suggests social platforms are stuck in a game of whack-a-mole with these products, despite the efforts of both human moderators and automation. That’s not unlike the same challenges these platforms have had with stopping the spread of Covid-19 conspiracy theories and fake news.

The trend in fake Covid-19 products is especially troublesome because many of these products can look convincing to the average person. Jay Kennedy, a professor at Michigan State University’s criminal justice school and Center for Anti-Counterfeiting and Product Protection, emphasizes that it’s relatively easy for counterfeiters to make the package of a fake product look believable: They can buy the vials and boxes from legitimate medical supply companies and then replicate any logos and certification stamps.

The accounts used to advertise these products might look less legitimate. They do not typically have a large number of followers, for instance, and they generally aren’t meant to exist long-term. Sellers have an incentive to keep them online just long enough to attract a buyer.

Mackey and his team are already analyzing a data set of 80 million tweets in addition to Instagram posts. Many of these posts prompt people to call them directly — perhaps using an encrypted app — using Covid-19 terms to advertise. They might ask potential buyers to use Bitcoin or other unusual payment schemes. Angelo Mazza, an intellectual property attorney who recently wrote a brief on Covid-19 counterfeits, adds that weird spellings and formatting of words are a strong hint that a seller isn’t authorized. The apparent typos might actually be attempts to evade screening algorithms set up by the social media platform. 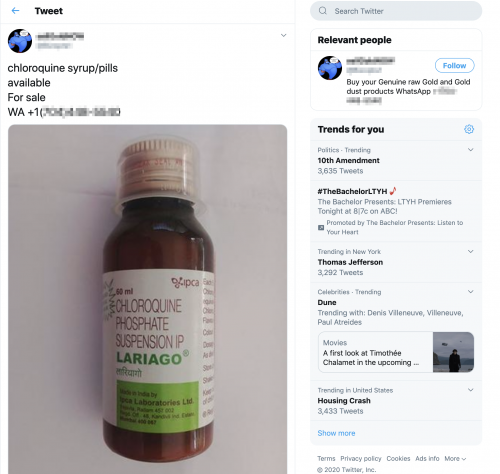 Regardless, if you see a drug available on the internet that normally requires a prescription you don’t have, don’t buy it. Even if you do manage to get ahold of the real pharmaceutical, it’s dangerous to take a medication unsupervised. One person has already died from taking chloroquine phosphate, for instance, and a recent study shows that coronavirus patients may face the risk of fatal heart complications when taking the drug. Participating in the black market for hydroxychloroquine also contributes to a troubling shortage for people with lupus and arthritis, who can need it to stay healthy.

No tests for Covid-19 infection have been approved by the FDA for use at home. There are also no FDA-approved at-home serological tests, which measure the amount of Covid-19 antibodies in a patient’s body and, thus, detect their immunity to the disease. Currently, the best way to be tested for Covid-19 — if you’re considered eligible — is through a medical provider, such as an urgent care facility, a drive-through testing center, or a hospital.

“Most people probably don’t know how a normal test kit works,” explains Kennedy. “That’s one of the major disadvantages that we consumers have. We don’t know how things like that are supposed to operate.”

Black market Covid-19 test sellers seem eager to take advantage of this knowledge gap. On eBay, we found a listing for a “rapid test device” for the Covid-19 antibody from a seven-year-old seller with generally positive feedback. Claiming to be based in Lithuania, the account previously sold mostly clothing.

The product listed certainly seems to resemble a legitimate Covid-19 test. The packaging bears the logo of a company called Realy Tech. The FDA lists “Hangzhou Realy Tech” as a company that’s notified the agency as having validated a serological test on offer, but the agency has not approved or reviewed its validation. Of course, there’s no way to know if this product on eBay was even produced by Realy Tech.

An eBay spokesperson told Recode that the platform is taking steps to block and remove products that make “false health claims,” and by the time of publication, eBay had taken down the above post for promoting false health information. Facebook, meanwhile, had taken down a page that appeared to be from the company Realy Tech.

The fake Covid-19 test problem is more widespread than this single example. Mackey says that many posts like this, using phrases like “Doctor Coronavirus” and “Covid-19” in their usernames, could easily be caught by an algorithm.

When Recode identified examples to Twitter, they were removed for violating the platform’s manipulation and spam rules. Similarly, after Recode identified accounts pushing similar test kit products on Instagram, which were also removed, a Facebook spokesperson explained that the company will take down posts and accounts pushing such products when it is made aware of them.

You can still find people promoting fake test kits, along with other phony coronavirus products, on the dark web.

Coronavirus-related scams aren’t limited to tests or treatments. As broken supply chains lead to shortages, instances of price-gouging and outright fraud regarding medical supplies are becoming increasingly worrisome. In late March, a health care workers union claimed to secure a stash of 39 million N95 masks to sell to hospitals, a huge claim at the time that many found dubious. The masks never ended up being delivered to some health care centers, and an attempted seizure by federal authorities revealed that they were part of an elaborate, international grift.

Mazza, the intellectual property attorney, points to this example as a warning of what’s to come. “If it sounds too good to be true, there’s likely a problem,” he says. “Let’s look out for the guys selling the magic beans — all the different cliches that come to mind, they’re going to apply tenfold here.”

The number of bad actors seems to be growing. On March 22, the Justice Department announced its “first enforcement action against Covid-19 fraud,” which involved shuttering and launching an investigation into a website that allegedly sold vaccines to unsuspecting Americans in an attempt to capitalize on the fear surrounding the pandemic. The FBI has since arrested one man, after he sold coronavirus “prevention pills” to an undercover agent. And in early April, Customs and Border Protection caught fake Covid-19 test kits being shipped in from the United Kingdom through the Los Angeles International Airport.

In some cases, government investigators are working with tech companies to catch scammers. For instance, Facebook, eBay, Amazon, and others have partnered with Georgia Attorney General Chris Carr to go after price gougers and others hoping to profit from the Covid-19 crisis. Twitter, meanwhile, says it’s working with governments and public health authorities to crack down on content that promotes fake treatments.

Fakes will be pervasive as long as Covid-19 is

Ultimately, Mackey explains that trends in fakes and counterfeits will continue to coincide with topics in the news cycle. When there’s a legitimate, Covid-19-related product, scammers and counterfeit sellers will likely emerge to take advantage of the people desperate to get ahold of it.

If and when real versions of at-home tests become available, the problem of fake and scammy tests will likely worsen. Mackey warns that once a vaccine is available, we should expect to see more bogus vaccines pop up as well. And more than 50 health experts warned in a letter earlier this month that any shortages in legitimate Covid-19-related products will make the phony treatment and vaccine problems worse.

Eventually, the onslaught of fake Covid-19 products showing up online could just become part of our new reality.

“I’ve never seen anything like this,” Mackey said. “I mean, it’s a full-blown infodemic.”

Open Sourced is made possible by Omidyar Network. All Open Sourced content is editorially independent and produced by our journalists.

Previous : Indian Actress Taapsee Pannu Reveals Why She Got Slapped Seven Times on Sets of ‘Thappad’
Next : Facebook will start nudging users who have “liked” coronavirus hoaxes