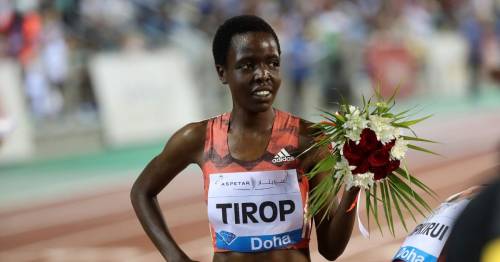 Who is Olympian Agnes Tirop’s husband – and what is known about ‘suspect’ so far?

Olympic distance runner Agnes Tirop, 25, has been found dead at her home in Iten, western Kenya.

Local police have launched a criminal investigation and confirmed they are searching for Tirop's husband in connection with her death.

Police have named him as a suspect, with Keiyo North Sub County Police Commander Tom Makori telling AFP that Tirop's husband Emmanuel Rotich was the subject of a police hunt.

He said: "The suspect had made a call to Tirop's parents saying that he'd committed something wrong. So we believe he knows what happened."

Ms Tirop was found with stab wounds to her neck and stomach on Wednesday, having been reported missing by her father on Tuesday night.

The region's head of police, Tom Makori, said investigators "found Tirop on the bed,” with “a pool of blood on the floor."

It is believed the wounds were made by a knife and were what caused her death.

Little is known about Ms Tirop's husband, but speaking to local journalists Mr Makori said: "Her husband is still at large, and preliminary investigations tell us her husband is a suspect because he cannot be found.

"Police are trying to find her husband so he can explain what happened to Tirop."

Tirop was a two time bronze medallist in the Athletics World Championships and finished fourth in the finals of the 5000 meters at the recent Tokyo Olympics finishing 0.75 seconds behind Ethiopia's bronze medallist Gudaf Tsegay.

“It is unsettling, utterly unfortunate and very sad that we've lost a young and promising athlete who, at a young age of 25 years, she had brought our country so much glory through her exploits on the global athletics stage including in this year's 2020 Tokyo Olympics where she was part of the Kenyan team in Japan.

"It is even more painful that Agnes, a Kenyan hero by all measures, painfully lost her young life through a criminal act perpetuated by selfish and cowardly people. I urge our law enforcement agencies led by the National Police Service to track down and apprehend the criminals responsible for the killing of Agnes so that they can face the full force of the law."

Tirop competes in the Diamond League
(

Athletics Kenya said: "Kenya has lost a jewel who was one of the fastest-rising athletics giants on the international stage, thanks to her eye-catching performances on the track."

Ms Tirop impressed at a young age when at 19 she became the youngest person to win the world cross country title since 1985.

Thomas Bach, president of the International Olympic Committee called Tirop "a young and bright talent," who "gave hope and inspiration to so many people."

Her sponsor, Adidas, said Tirop's "legacy will forever live on in our memory".