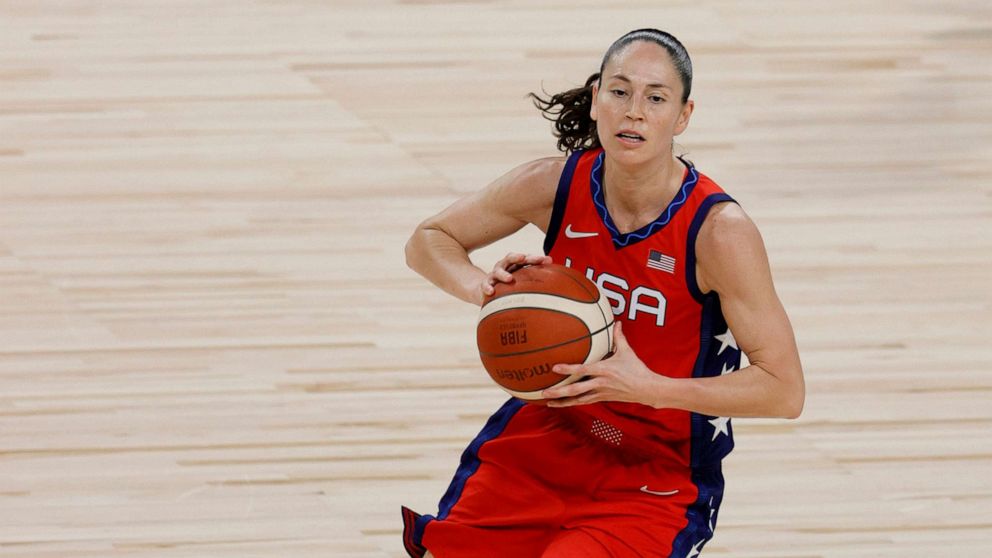 Women’s basketball star Sue Bird and baseball player Eddy Alvarez have been selected as the flag bearers to lead Team USA into Olympic Stadium in Tokyo for the opening ceremony of the Summer Games.

Bird, the 40-year-old guard for the Seattle Storm who’s won four Olympic gold medals, learned of her selection during a team practice Wednesday from teammate Diana Taurasi, prompting applause from other players on the squad, according to a video the team posted on Twitter.

“Obviously, I’m not making a speech,” Bird said to her teammates and coaches, “but anything I get has to do with the people that are here and do it with me. It’s never about one person.”

Mark Brown/Getty Images, FILEEddy Alvarez #2 of the United States in action against Venezuela during the WBSC Baseball Americas Qualifier Super Round at Clover Park on June 05, 2021 in Port St. Lucie, Florida.

Alvarez, 31, an infielder for the Florida Marlins, also is an Olympic medalist but in another sport — at the 2014 Winter Olympics in Sochi, Russia, he won a silver medal as part of a speedskating team.

“Thank you to everyone that honored me with this privilege! I will wave our colors proudly,” Alvarez said on Twitter.

Ethan Miller/Getty ImagesSue Bird #6 of the United States passes against the Australia Opals during an exhibition game at Michelob ULTRA Arena ahead of the Tokyo Olympic Games on July 16, 2021 in Las Vegas, Nevada.

Traditionally, countries have had a lone flag bearer, but this year the International Olympic Committee has asked teams to a woman and a man female as a symbol of gender parity.

The opening ceremony, delayed due to COVID-19, is scheduled for Friday, with the parade of athletes from 205 countries and the traditional lighting of the Olympic flame.

On Tuesday, the chief of the Tokyo 2020 organizing committee addressed concerns of rising COVID-19 cases during a news conference and did not rule out the possibility of a last-minute cancellation.

MORE: Tokyo Olympics leader doesn't rule out canceling games at last minuteMORE: Stick to sports? Here's what could happen to Olympians who protest at Tokyo Games

At least 71 people linked to the games, including athletes in the Olympic Village, have tested positive for coronavirus since arriving in Japan, Olympic organizers said on Tuesday.

More than 11,000 athletes from around the world are scheduled to compete in Tokyo.