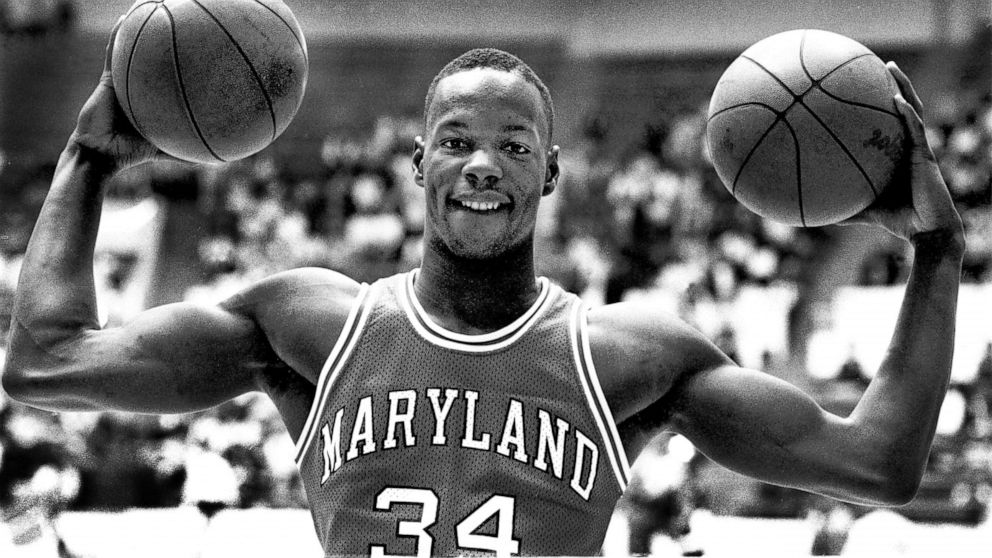 Legendary basketball player Len Bias is being inducted into the National Collegiate Basketball Hall of Fame, 35 years after his death, but his family and fans are still grieving over the fact they never saw him live his dream.

“To see so many people just broken. I mean, I can talk to men and women now and they have tears in their eyes about what happened 35 years ago in the death of this beautiful athlete, this beautiful man,” Bias’ mother, Dr. Lonise Bias, told ABC News in an exclusive interview.

Bias was drafted No. 2 overall by the Boston Celtics in the 1986 NBA draft, but two days later he died from a drug overdose. The athlete was doing cocaine with a few of his fellow teammates at his dorm at the University of Maryland, when he collapsed, had a seizure and went into cardiac arrhythmia. He was taken to the hospital and pronounced dead. He was 22 years old.

The Washington Post via Getty Images, FILEMaryland basketball star Len Bias poses for a photo taken at the University of Virginia in an undated photo.

Bias’ mother dreamed of death before his overdose

Still in mourning so many years later, Bias’ mother said that, in a way, she saw his death coming.

“Eighteen months before Len’s death, I began to have these strange dreams, you know? And it would always be around someone dying, close to me in the family,” she recalled. “And as we progressed into the whole draft situation and the hype about Len being the No. 1 or the No. 2 pick of the draft, I was excited, but it just seemed like it wasn’t going … I won’t say it wasn’t going to happen. It was almost like I would believe it when I saw it.”

Boston Globe via Getty Images, FILELonise P. Bias speaks to students during a substance-abuse program at the John D. O’Bryant School of Mathematics and Science in Boston on May 17, 2018. She is the mother of Len Bias, who died from cocaine use three days after the Boston Celtics made him their top draft pick in 1986.

She said she didn’t feel like she could share her dark thoughts with anyone else in the family, so she would “just start weeping.” She said, “I couldn’t stop.”

“So when Len died June 19, 1986, the cries stopped,” she said. “And it was like, it’s over. It’s over even though he is gone. I have lost my son. All of the emotional trauma that I was going through, it was like it ended. That part ended but then you had to pick up and deal with the rest of the story, the grief, the ‘whys,’ the ‘how comes,’ and all of that.”

“What I saw was my son … Len Bias, but it wasn’t until he died that I understood the magnitude of who this man was,” his mother said. “I saw him as my son, but other people saw the beauty of his game.”

This Sunday, the late athlete is being honored for his accomplishments during his career. Among many things, he was a first-team All-American, led the Atlantic Coast Conference in scoring his junior year of college, was twice named the ACC’s Player of the Year and even outscored Michael Jordan in a game head to head.

Bias’ mother said the whole family will be there to celebrate his induction into the National Collegiate Basketball Hall of Fame this Sunday and remember his talents.

MORE: Michael Jordan from College Players Before They Were NBA Stars

“One grandson has on his calf, he has a tattooed Len dunking the ball, my oldest grandson, and the Lord’s Prayer on there and then my next grandson — they were all athletes — has on his muscle ‘Bias strong.’ So, they know who their uncle was and we still carry that spirit and we still talk about it,” Bias’ mother said.

Focus on Sport via Getty Images, FILEUniversity of Maryland’s Len Bias #34 aims to shoot from the free throw line during a game in an undated photo.

After Bias’ death, the topic of drug abuse became top of mind in Congress, and the Anti-Drug Abuse Act of 1986, known as the “Len Bias Law,” was signed by President Ronald Reagan in October of that year. The law provided a mandatory minimum prison term of 20 years and a maximum of life in prison, along with a fine of up to $2 million, for anyone convicted for a drug distribution case that led to a death or serious physical injury.

AP, FILELen Bias wears a Boston Celtics hat after being selected as the No. 2 pick in the NBA draft in New York, June 17, 1986. Two days later, on June 19, Bias died of a cocaine overdose in a Maryland dormitory room during a party to celebrate his success.

Bias’ mother, who lost another son, Jay Bias, in a drive-by shooting just 48 months after Bias’ death, has since dedicated her life to helping young people in trouble and advocating against drug use and gun violence.

“Because of Len and Jay I have so many children now. I am a mother of many. Two sons left but I have multitudes of children yet to speak to,” she said. “Just pouring into them wisdom and strength to keep pressing and to keep pushing.”