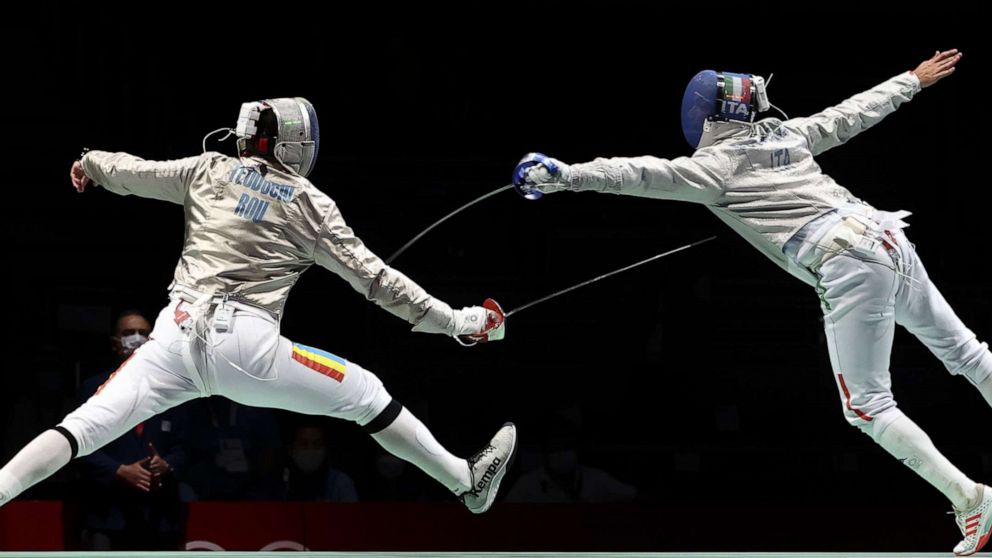 Qian Yang, 21, received the first gold model of the 2020 Games in the 10 meter air rifle event, where competitors have 75 minutes to shoot 60 rounds at a target.

The U.S. women’s soccer team defeated New Zealand 6-1, a strong showing after losing to Sweden 2-0 in their previous game. The women’s team has one more game left in the group round.

Coronavirus cases increase to 127 among Olympic athletes and personnel

Among the new cases, which have increased by 17 since yesterday, only one infected person was staying at the Olympic Village. In the greater Tokyo area, officials have reported 1,128 new cases on July 24, a 133% increase in the 7-day rolling average. U.S. Olympic & Paralympic medical director Dr. Jonathan Finnoff said at a press conference on July 23, that an estimated 83% of the U.S. athletes competing at the games are vaccinated.

Twelve-year-old Hend Zaza of Syria was eliminated from her women’s single preliminary round table tennis match. Zaza lost to veteran Liu Jia but said she was pleased with her performance, according to The Associated Press.

Anne-christine Poujoulat/AFP via Getty ImagesSyria’s Hend Zaza hits a shot against Austria’s Liu Jia during their women’s singles preliminary round table tennis match at the Tokyo Metropolitan Gymnasium during the Tokyo 2020 Olympic Games in Tokyo on July 24, 2021.

Three-on-three basketball made its Olympic debut today with the U.S. women’s team defeating France 17-10. This Olympic version of a street game is won by being the first to 21 points, or leading after the 10-minute game clock has expired. The United States is solely represented by the U.S. women’s team, as the men’s team failed to qualify.

MORE: Nigeria men aim for Africa's 1st Olympic basketball medalChristian Petersen/Getty ImagesStefanie Dolson of the United States drives to the basket during the Women’s Pool Round match between United States and France on day one of the Tokyo 2020 Olympic Games at Aomi Urban Sports Park on July 24, 2021 in Tokyo, Japan.Andrej Isakovic/AFP via Getty ImagesBelgium’s Rafael Bogaerts jumps to score during the men’s first round 3×3 basketball match between Latvia and Belgium at the Aomi Urban Sports Park in Tokyo, on July 24, 2021 during the Tokyo 2020 Olympic Games.

As the first round of tennis action began today, two players from Georgia were barred from competing after they were informed their country’s Olympic committee never submitted paperwork, according to The Associated Press. Doubles players Oksana Kalashnikova and Ekaterine Gorgodze were sent home after their petition to stay was dismissed.

MORE: What is a Golden Slam? Novak Djokovic looks to make men's tennis history with OlympicsSeth Wenig/AP PhotoNovak Djokovic, of Serbia, serves during the first round of the tennis competition at the 2020 Summer Olympics, Saturday, July 24, 2021, in Tokyo, Japan.Giuseppe Cacace/AFP via Getty ImagesSerbia’s Novak Djokovic returns a shot to Bolivia’s Hugo Dellien during their Tokyo 2020 Olympic Games men’s singles first round tennis match at the Ariake Tennis Park in Tokyo on July 24, 2021.

Cat Osterman, 38, led the U.S. softball team to their third victory, a 2-0 win over Mexico on July, 24, 2021. Osterman was on the 2008 Olympic team that received the silver medal after losing to Japan.

Yuichi Masuda/Getty ImagesCat Osterman pitches in the second inning of the game against Team Mexico during the Softball Opening Round on day one of the Tokyo 2020 Olympic Games at Yokohama Baseball Stadium on July 24, 2021 in Yokohama, Kanagawa, Japan.Matt Slocum/AP PhotoUnited States’ Monica Abbott, center right, and Cat Osterman, center left, embrace defeating Mexico during a softball game at the 2020 Summer Olympics, July 24, 2021, in Yokohama, Japan.

More scenes from the day’s action

Catch up on the best moments from the opening ceremony