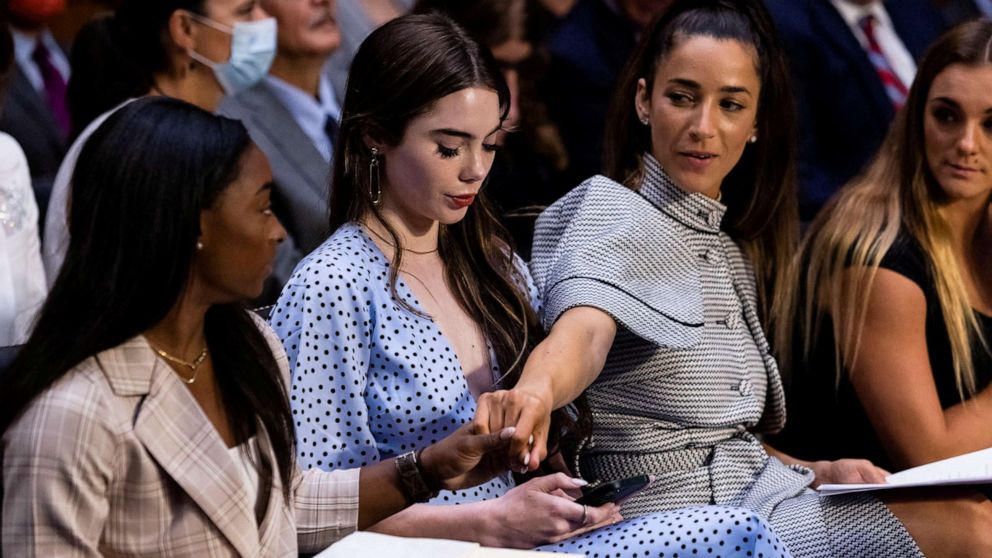 Four elite gymnasts are calling on Congress to dissolve the United States Olympic & Paralympic Committee’s board of directors, alleging the body fostered a culture of abuse and ignored serial sexual abuse by Larry Nassar, a former USA Gymnastics team doctor.

“We make this request after years of patience, deliberation, and unrequited commitment to learn from our suffering and make amateur sports safe for future generations,” Simone Biles, Aly Raisman, McKayla Maroney and Maggie Nichols, who all testified before Congress last month about what they say were failures in the FBI’s handling of the sexual abuse case, wrote in a letter to Congressional leaders Wednesday.

“We believe the Board’s past actions demonstrate an unwillingness to confront the epidemic problems with abuse that athletes like us have faced and a continued refusal to pursue true and necessary reform of the broken Olympic system,” the letter continued.

Nassar was sentenced in 2018 to up to 175 years in prison after pleading guilty to criminal sexual conduct charges. The sentencing came after dozens of girls and women accused him of sexually abusing them.

“Since becoming aware of Nassar’s abuse, the USOPC’s top priority has been to hide culpability and avoid accountability,” the athletes wrote in their letter, claiming the board “took no investigative action whatsoever after learning that Nassar was an abuser.”

The athletes wrote that the “ecosystem” that gave shelter to the likes of Nasser “still exists,” and they took aim at officials still in positions of power at USOPC and its foundation. They asked that Congress replace the board with one that will investigate “systemic” sexual abuse; otherwise, they said, “athletes will remain at risk.”

MORE: How USA Gymnastics has changed since the Larry Nassar scandal

The four women addressed their letter to Sen. Richard Blumenthal, D-Conn., and Sen. Jerry Moran, R-Kan., who co-sponsored a bill signed into law last year that gives Congress the power to dissolve the board.

Pool/ReutersPHOTO: U.S. Olympic gymnast Simone Biles testifies during a Senate Judiciary hearing about the inspector general’s report on the FBI handling of the Larry Nassar investigation of sexual abuse of Olympic gymnasts, in Washington, D.C., on Sept. 15, 2021.

In response to the letter, Blumenthal outlined potential next steps, saying Congress should “develop procedures to appoint a new board before dissolving the old one, and must be approved by the House and Senate before being signed by the President.”

“We’re grateful to these athletes for their continued demand for justice and accountability — a goal we share,” he said in a statement. “We look forward to continuing our work together to ensure that USOPC is held responsible for past failures.”

USOPC defended its handling of the case in a statement to Reuters, saying it was “fully committed to addressing sexual abuse at every level of sport.”

“The letter addressed to Congress underscores their concern, and we recognize the bravery of the athlete survivors who continue to bring these issues forward,” the USOPC told Reuters. “The letter references issues that USOPC has been addressing for more than two years –- and the work we continue to do every day.”

Olympians Biles, Raisman and Maroney, as well as world champion Nichols, testified about the abuse they suffered at the hands of Nassar during a hearing last month with the Senate Judiciary Committee, which is investigating the FBI’s handling of the sexual abuse case.

“Over the past few years it has become painfully clear how a survivor’s healing is affected by the handling of their abuse, and it disgusts me that we are still fighting for the most basic answers and accountability over six years later,” said Raisman, who cited failings by USA Gymnastics, the USOPC and the FBI.

Anna Moneymaker/Getty ImagesPHOTO: U.S. Olympic Gymnast McKayla Maroney wipes tears from her eyes during a Senate Judiciary hearing about the inspector general’s report on the FBI handling of the Larry Nassar investigation of sexual abuse, on Sept. 15, 2021 in Washington, DC.

A Department of Justice inspector general report released in July found the FBI made “fundamental errors” in its response to allegations against Nassar that were first brought to the agency in July 2015.

“We have been failed, and we deserve answers,” Biles said during her testimony. “Nassar is where he belongs, but those who enabled him deserve to be held accountable. If they are not, I am convinced that this will continue to happen to others across Olympic sports.”

Pool/ReutersPHOTO: U.S. Olympic gymnast Maggie Nichols is sworn in during a Senate Judiciary hearing about the inspector general’s report on the FBI handling of the Larry Nassar investigation of sexual abuse of Olympic gymnasts in Washington, D.C., Sept. 15, 2021.

Following Nassar’s sentencing in 2018, USOPC (at the time known as the U.S. Olympic Committee) penned an open letter to Team USA athletes to “tell all of Nassar’s victims and survivors, directly, how incredibly sorry we are.”

“We have said it in other contexts, but we have not been direct enough with you,” Scott Blackmun, former chief executive of the organization, wrote. “We are sorry for the pain caused by this terrible man, and sorry that you weren’t afforded a safe opportunity to pursue your sports dreams. The Olympic family is among those that have failed you.”

The entire USA Gymnastics board resigned in the wake of the sentencing, after USOPC demanded the remaining members step aside or face termination.

Previous : Washington Capitals star Alex Ovechkin scores twice, now No. 5 all time on NHL career goals list
Next : Kyrie Irving says decision to remain unvaccinated is ‘about being true to what feels good for me’