Tracey Kennedy: County sides will have enough time to prepare

Although some Cork county finals may run as late as October 11, county board chairperson Tracey Kennedy believes the championship program unveiled today affords the Cork hurlers and footballers sufficient preparatory time ahead of their provincial semi-finals.

Nine Cork finals across Premier Senior, Senior A, Premier Intermediate, Intermediate, and Lower Intermediate -hurling only- are scheduled for the weekend of October 3/4. But should a dual club progress to a county final in both codes, or was a divisional side and one of their feeder clubs to reach the final of their respective grades, then certain county deciders will be pushed back to October 10/11 and, in the process, narrow the period of time managers Ronan McCarthy and Kieran Kingston have with their full squads before inter-county competitions resume.

If all nine county championships are completed by the weekend of October 3/4, the Cork hurlers will have four uninterrupted weeks together ahead of their championship opener, one less than what the footballers will enjoy. But if club finals go back to October 10/11, this would narrow to three and four weeks respectively the period of time Kingston and McCarthy have exclusive access to their panels. 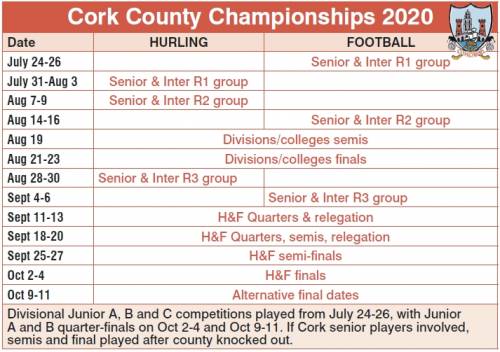 In an interview with this newspaper over the weekend, Cork football manager McCarthy remarked that six weeks would be ideal preparatory time.

County Board chairperson Tracey Kennedy described as “fair” the window afforded to both Cork panels.

“We had discussions with our inter-county managers, we would always consult them as much as we can. We listened to their views. We also listened to the views of clubs, quite a number of clubs sent in views. We made a decision to go with a format that we feel is fair to everybody,” said Kennedy.

The chairperson believes the program agreed by the executive and Competitions Control Committee was the best achievable in the 13-week window handed down by Croke Park.

The decision not to utilise the weekend of July 18/19 to begin their competitions was taken on account of the restrictions – dressing-rooms off-limits and outdoor gatherings of more than 200 prohibited – in place until July 20.

The three groups of four format in each grade is what was agreed last year. What has changed is the number of teams progressing to the knockout stages from each group, down from three to two.

“We gave serious consideration to all options,” Kennedy continued.