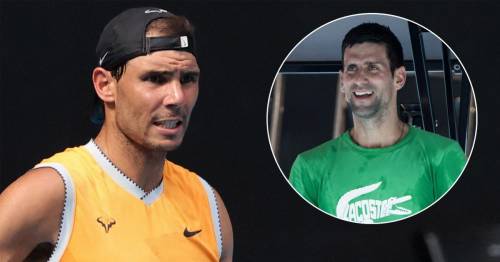 Tennis’ first major event of the year is traditionally known as the ‘Happy Slam’, but it has been anything but in the buildup to this year’s edition of the tournament.

Novak Djokovic has dominated the headlines, beginning with his medical exemption, to being detained at Melbourne Airport and transported to a quarantine hotel, before a judge ruled in favour of his successful appeal.

To add to Djokovic’s plight, the world number one took part in an interview with French media outlet L’Equipe on December 18, and admitted he knew he had the virus on that day.

He blamed his agent’s error for an “administrative mistake” after claiming he had not travelled in the two weeks before his flight to Australia.

As a result of the shocking turn of events throughout the last week, the tennis has somewhat taken a backseat.

As things stand Djokovic, the favourite to take the crown once again, is currently in the Australian Open draw, as is his greatest rival, Rafael Nadal.

Both players are gunning for a record 21st grand slam title and the pair could set up a potential historic meeting in the semi-finals.

However, the Serbian’s right to stay in Australia hangs by a thread as Immigration Minister Alex Hawke still has the power to deport him – a decision which is set to be made either today or tomorrow.

Should the ruling be made in favour of Djokovic being ordered to leave Oz and not participate in the Australian Open, contrary to the belief of many, it would not make Nadal the favourite to hoist the Norman Brookes Trophy for a second time and here’s why.

A curtailed 2021 season due to injury has seen Rafa slip to number six in the world rankings and bagged just two titles last year.

Following a crushing defeat to Djokovic at the French Open last June, Nadal played just two more matches before ending his season due to a foot issue.

He made a return at the Mubala Championships in Abu Dhabi last month, where he was defeated by both Andy Murray and Denis Shapovalov.

The Spanish matador made his professional return last week at the Melbourne Summer Set, which he went on to win.

While picking up another trophy and contesting three matches on Rod Laver Arena will boost the tennis legends' confidence, he is still well short of the conditioning and match practice needed to win a major, especially one he has failed to conquer since 2009.

This is also Nadal’s first best-of-five tournament since Roland Garros last year and, with less than ten matches under his belt since then, the sporting icon will have to shake off some rust in the opening rounds.

The man himself played down his chances at the event, and easing any pressure may be a very shrewd move from Nadal.

The Majorca native hasn’t faced any of the top ranked players in a competitive tournament on a hard court since last year’s Australian Open, further adding to the challenge he faces in the upcoming fortnight.

Speaking of the game’s top-ranked players, Nadal will have to overcome multiple top-10 players if he is to reach the magic 21 major titles.

The Spaniard was handed an incredible draw, starting with American Marcos Giron and could face Thanasi Kokkinakis, the Aussie wild card, in the second round.

Big-hitting Russian Karen Khachanov may stand in Rafa’s way in the third round, before a potential last-16 match with Hubert Hurkacz, who is coming off an impressive 2021 and reached a career-high ranking of number nine.

Zverev, who has defeated Nadal in their last two hard court matches, is the projected quarter-finalist, Matteo Berrettini could be Rafa’s opponent in the semis if Djokovic doesn’t play, while the likes of US Open champion Daniil Medvedev, who won their last meeting, may await in the final.

Nadal has never beaten four top 10 players en route to winning a grand slam and if he wants to make history this month, he will have to do it the hard way.

Shaking off mental scars and battling pressure of making history

Djokovic and Nadal contested the 2012 and 2019 Australian Open finals, with the Serb winning both
(

Nadal has rarely succumbed to pressure throughout his illustrious career.

Not many players have shown the grit, desire and resilience on the court to the extent he has, but even the 36-year-old is sure to feel the weight of what he could achieve at Melbourne Park this year.

Some of the tennis legend’s most heartbreaking moments have taken place at the Australian Open, including agonising losses and injuries.

He was 3-1 up in the final set of the 2017 final against Roger Federer, before the Swiss Maestro reeled off five straight games to take the title.

An injury hampered him in the 2014 final against Stan Wawrinka, and two defeats in the 2012 and 2019 finals to Djokovic, may have an effect on Rafa as he heads deeper into the tournament.

If anyone can overcome a mental block to succeed, look no further than the great man, but winning the Australian Open this year may prove to be a step too far given the reasons mentioned.

After testing positive for coronavirus last month, there’s the possibility of Nadal suffering effects of long covid, which we hope is not the case.

So if Nadal's not the favourite if Djokovic is sent home, who is?

It is difficult to look past the duo of Zverev and Medvedev, who impressed once again in 2021.

The German won six titles this year, including Nitto ATP finals, beating the Russian in the final.

The Russian meanwhile won the US Open last September, the first major title of his career.

The pair have now solidified themselves in the world's top three and it will take a supreme performance to beat either of them in the next two weeks.

If a fired-up and motivated player Djokovic does get the all-clear to play however, it will be tough to look past him lifting his tenth Australian Open Crown and record 21st grand slam title.