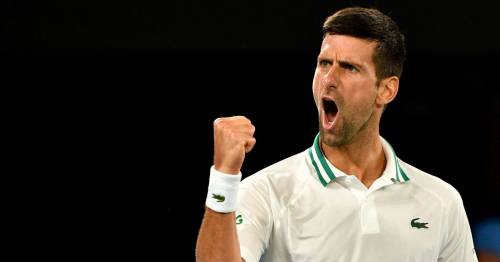 The ATP have labelled the saga surrounding Novak Djokovic "damaging" to his well-being as the world no 1 as waits to see if he can play in the Australian Open.

A dramatic few days was triggered last Tuesday when Djokovic seemingly ended months of speculation by announcing he would be flying down under for the first Grand Slam of 2022.

Despite being unvaccinated, his entrance was permitted due to a medical exemption, given because he has tested positive for the virus in the past six months.

However, he arrived at Melbourne Airport on Wednesday to have his visa revoked by border force officials, who ruled his exemption was not sufficient to enter the country and duly ordered for him to be deported.

That process was delayed after the 34-year-old's lawyers appealed the decision, and on Monday a judge ruled in Djokovic's favour – appearing to pave the way for him to compete in the Open.

However, the decision now rests with Australian immigration minister Alex Hawke, who possesses the authority to cancel the visa for a second time.

The issue has polarised tennis fans and pundits, and now the ATP has called for more clarity over Covid and vaccine-related rules.

"The ATP fully respects the sacrifices the people of Australia have made since the onset of COVID-19 and the stringent immigration policies that have been put in place," the statement read.

"Complications in recent days related to player entry into Australia have however highlighted the need for clearer understanding, communication and application of the rules.

"In travelling to Melbourne, it’s clear Novak Djokovic believed he had been granted a necessary medical exemption in order to comply with entry regulations.

"The series of events leading to Monday’s court hearing have been damaging on all fronts, including for Novak's well-being and preparation for the Australian Open."

The authority stressed the exemption requests were made independently of them – but said they had been in contact with Tennis Australia and welcomed the outcome of the hearing.

The ATP also urged all unvaccinated players to get jabbed, and added "We are encouraged that 97% of the Top 100 players are vaccinated leading into this year’s Australian Open."

The tournament, which Djokovic has won nine times, is scheduled to get underway on January 17.

If he does play and subsequently win, he will land a record-breaking 21st Grand Slam.

Previous : Accusations and awkward press conferences – what happened as Novak Djokovic saga escalated again
Next : Novak Djokovic in limbo for another day amid probe into whether he lied on entry form