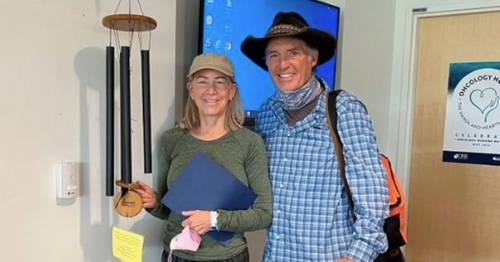 Tennis icon Chris Evert has released a promising update on her chemotherapy as she battled stage 1 ovarian cancer. The American announced the completion of her treatment and took to social media to share the news.

She posted a snap beaming with pride as she rang the hospital bell to signal the end of her chemo. "Right before the ringing of the bell signifying the end of my 6 chemos," the 18-time grand slam champ penned.

The 67-year-old also uploaded a video thanking her doctors and received her diploma before a positive and encouraging message was read out. “Thank you so much, you guys were great, good luck to everybody,'' Evert said before adding with a chuckle: “I hope we don’t see you again!”, as she prepared to leave the hospital in Cleveland, Ohio.

The tweet read: “I’m a little out of it (meds) but nonetheless, thankful and relieved I finished my six chemo treatments,” alongside a series of prayer hand emojis. Fellow US tennis star Pam Shriver saw the posts and replied: "Happy tears in Los Angeles! Congratulations."

Earlier this year an ESPN article written by both Evert and journalist and friend Chris McKendry, detailed Evert’s thoughts and feelings after a malignant tumour was found during a preventative hysterectomy. McKendry quoted the text the sporting legend sent her with the dreadful news, which read: “The pathology report came back today and revealed I have a malignant tumor in my fallopian tube; going in for more surgery next week then chemo … f— me…”

“I read the text five times before it sunk in." She added: "I just couldn't believe it. I had been working out, doing CrossFit, playing tennis. I didn't feel anything different.” Evert lost her younger sister, former pro tennis player Jeanne Evert Dubin to the same illness in 2020. Her surgeon, Dr Joel Cardenas shed some more light on the importance of detecting ovarian cancer early. "70-80% of ovarian cancer is diagnosed at Stage 3 or 4," he explained. "Three months or so from now, she'd be Stage 3 or 4. If nothing is done, it reaches the abdomen."

Thankfully the tennis pundit’s diagnosis was made early and the completion of her chemotherapy is very encouraging. The former world number one last commented on tennis during the recently concluded Madrid Open, where she lambasted the scheduling of the tournament.

The two men’s semi-final matches adversely affected the women’s final due to start at 6pm as well as impacting the men’s final the following day. Although Novak Djokovic and Carlos Alcaraz played the first semi-final in the afternoon, it delayed the women’s final by 2 hours, while the second match featuring Alexander Zverev and Stefanos Tsitsipas did not start until late in the evening.

Evert took to her Twitter, saying: “Wait… the men’s semi going on after 10pm tonight with a final tomorrow?” followed by “My bad… 11:00, that’s even worse!!!!!” Alcaraz went on to win his second Masters 1000 crown, while Ons Jabeur captured the crown in the Spanish capital for the first time and became the first Arab player – male or female – to break into the world's top 10.