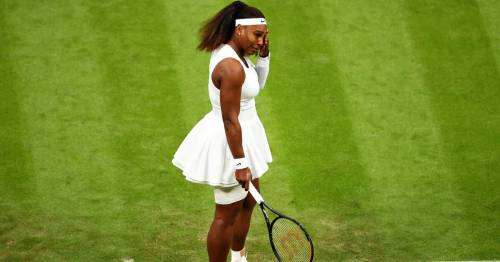 Serena Williams has been warned she will struggle at Wimbledon this summer when she makes her highly-anticipated return to tennis action at the Championships this month.

The 23-time Grand Slam champion announced her intention to play the third major of the year as well as this week’s Rothesay International Eastbourne. Williams suffered an injury to her right leg at SW19 in 2021 and was forced to retire in the first round, but she confirmed she has accepted a wild card to return to the All England Club as she seeks an eighth Wimbledon title.

In her absence, Williams has dropped to 1,208 in the world rankings. The American icon will attempt to find form by partnering Ons Jabeur to play doubles at Eastbourne before she once again attempts to draw level with Margaret Court’s record of 24 Grand Slams.

However, Williams’ former sparring partner Karolina Pliskova has rejected suggestions the 40-year-old will contend at Wimbledon. Last year’s Wimbledon finalist said: “I don’t know how long it has been since she has played. Has it been a year? It is a long time and she is not the youngest any more so I suppose the body also takes some time to get back into shape.

“Playing matches at tournaments is still very much different to just practising and from what I understand she is not playing (singles) here, she is just playing doubles. I think it will be difficult, super difficult for her no matter which kind of player she is because this is a thing where you still need some time.

“But of course, she is an amazing player, she achieved so much and still a number of players will be super scared to play her. This is her advantage but let’s see the level. I cannot really say.”

Jabeur and Williams will face Sara Sorribes Tormo and Marie Bouzkova at Devonshire Park with the doubles match expected to take place on Tuesday. While many players are inspired by Williams’ return, Spanish star and World No. 3 Paula Badosa is hoping to avoid the American in the Wimbledon draw.

“I think it surprised everyone but it’s very good to have her back. It really amazes me how she has all this hunger for the game,” Badosa said of Williams.

“It is a great inspiration. It is nice to have her back and I hope she can be back for much more time because I think she does very good for tennis.

“But the other side, of course I don’t want to play against her! I hope the draw goes for another player because no one wants to play against Serena and less on grass. Let’s pray for that!”

With doubts over the participation of Andy Murray due to an abdominal strain he picked up in Sunday’s Stuttgart final, Williams’ presence would be a major boost for organisers. Williams could have entered Wimbledon using a protected ranking specially reserved for players who have been sidelined through a long-term injury, but she opted not to do so to ensure she needs a wildcard berth to participate.

Do you think Serena Williams will win Wimbledon and draw level with Margaret Court on 24 Grand Slam titles? Let us know in the comments section.


Williams won the last of her seven Wimbledon singles titles in 2016, but she reached the final in 2018 and 2019 after returning from maternity leave. Williams could potentially compete in the women's or mixed doubles at SW19, as she has won the women’s doubles title alongside Venus six times while she linked up with Murray in the mixed event in 2019.

Williams reached the final in 2018 where she lost to Angelique Kerber, and followed it up with another final defeat to Simona Halep. However, her latest attempt to equal Court's record of 24 Grand Slams ended in tears on Centre Court 12 months ago, as Williams was forced to retire against Aliaksandra Sasnovich after slipping and sustaining an injury.

The issue meant Williams was forced to miss the US Open and the Australian Open that followed, while speculation suggested she could retire and never return to the WTA circuit. Long-term coach Patrick Mouratoglou revealed he had begun working with Halep in April, before Williams suggested she was targeting a return to on-court action at Wimbledon.