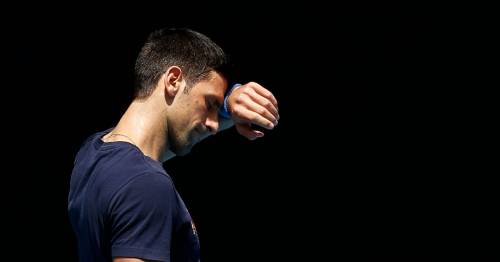 Novak Djokovic admitted to breaching Serbia’s Covid protocols while the country's Prime Minister insisted the rules ‘apply to all’ – which means the world number one could be punished.

Djokovic sensationally admitted to lying on his entry declaration form and interacting with others while knowingly infected with Covid.

While the world awaits immigration minister Alex Hawke’s final decision regarding his visa, Djokovic is reeling following accusations of breaking the rules.

Djokovic revealed he attended both an interview and a photoshoot with French newspaper L’Equipe at his tennis centre in Belgrade, despite recently receiving a positive PCR test result.

“While I went home after the interview to isolate for the required period, on reflection, this was an error of judgement and I accept that I should have rescheduled this commitment,” he wrote on Instagram.

Djokovic was photographed maskless, and he insisted he didn’t want to cancel the event because he ‘didn’t want to let the journalist down’.

Before Djokovic’s revelation, Prime Minister Ana Brnabic insisted no one was above public health regulations.

“I think it is important that everyone knows that in Serbia the laws equally apply to all and that surely no one is allowed to breach the isolation rules as it therefore puts the health of other people in jeopardy,” she said.

Brnabic went on to praise Djokovic for all he has done and continues to do for Serbia, but she declared rules must be followed.

“There are some standards that have to be met, in this case it seems to me that if he was aware of it (the positive COVID test) then it is a clear violation of the rules,” the Prime Minister said.

“What the sanctions are? That’s what the relevant institutions will have to look into.”

Per Article 248 – ‘Failure to Act Pursuant to Health Regulations During Epidemic’ – whoever fails to comply with the rules faces a maximum penalty of three years in prison.

The findings come amid reports the Australian Border Force is investigating Djokovic following concerns he incorrectly declared he had not travelled – and would not do so for two weeks – prior to his flight to Australia.

The declaration is accompanied with a warning that giving false or misleading information is a ‘serious offence’, also punishable by civil penalties.

A Twitter post by a Portuguese tennis reporter, Jose Morgado, appears to show Djokovic was in Belgrade at Christmas, posing with the handball star Petar Djordjic.

Djokovic addressed the declaration, claiming it was an ‘administrative mistake’ made by his agent.

“My agent sincerely apologises for the administrative mistake in ticking the incorrect box about my previous travel before coming to Australia,” said Djokovic. “This was a human error and certainly not deliberate.”

Djokovic arrived in the country to compete in the opening grand slam of the season only for border guards to reject his documents and place him in detention.

However, Djokovic’s fate will be decided by immigration minister Hawke, who can personally intervene and decide to cancel his visa anyway – which would see Djokovic banned from Australia for three years.

A decision is expected on Thursday.