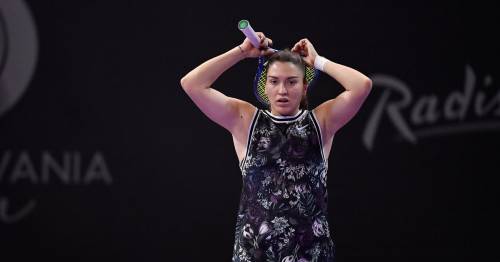 Russian-born tennis player Natela Dzalamidze will be allowed to compete at Wimbledon this year, after switching to Georgian nationality. Russian and Belarusian players have been banned by the All England Club this summer following Vladimir Putin ’s invasion of Ukraine.

This has meant big names such as Daniil Medvedev and Aryna Sabalenka are unable to compete at the Grand Slam event that begins at the end of the month. One star who has found her way round the banning though is Dzalamidze.

As a result the 29-year-old will compete at SW19 this summer under the Georgian flag, after her nationality change came just in time for the upcoming tournament.

Dzalamidze’s nationality switch was approved by the WTA on June 6, a week prior to the deadline for entry into Wimbledon. Despite the convenience of her change, the doubles star has that reiterated her decision came before it was confirmed that Russian and Belarusian players would miss out.

Instead, Dzalamidze claimed her switch was made in an attempt to compete at an Olympic Games at some point in her career. She told The Times: “I am definitely against the situation which is going on in Ukraine. I am for peace all around the world and I believe that in the 21st century people are able to find a diplomatic way to solve the problems.

Natela Dzalamidze nationality switch has been confirmed by the WTA.
(

“But my decision was made because I am focusing on my career and would like to have the chance to compete at the Olympic Games. Of course it was not the easiest decision because now is not an easy time.”

Reiterating the point that her decision came before the ban, Dzalamidze added: “The first discussion I had with the WTA was during Indian Wells at the beginning of March. It was before Wimbledon made a decision to ban Russian players and was just because my idea was to start representing the country and to have a chance at the Olympics.

“If I made the decision to play for Georgia and have a chance to play Wimbledon, why not? That's why I made it [the decision] before Wimbledon. In this kind of situation, there isn't a perfect time to do it.” The 29-year-old has entered the doubles draw, and will partner Serbia's Aleksandra Krunic at this year’s event.

Previous : Middle aged who can’t stand on one leg easily for 10 seconds more likely to die young
Next : Couple who met at nine months and ‘married’ at nursery now tying the knot for real