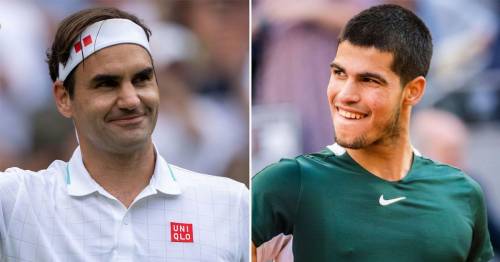 Roger Federer will be disappointed if he is unable to face Carlos Alcaraz before the end of his career, according to top pundit Annabel Croft. The teenager has enjoyed a phenomenal start to 2022, winning four tournaments and now sits inside the top 10.

En route to his latest title in Madrid, the Spaniard notched consecutive victories against compatriot Rafael Nadal, the clay-court king, world number one Novak Djokovic and the defending champion Alexander Zverev in the final. Victory over the German marked Alcaraz’s seventh straight top-10 win. He is currently resting an ankle injury sustained in the Spanish capital ahead of Roland Garros.

One top player the youngster has yet to face is Federer, who has spent the majority of the last two years on the sidelines due to surgeries on his knee and has targeted a return in late August/early September, in time for the Laver Cup. Former world number 24 Croft has argued that the Swiss Maestro will be “sad” if he never gets to challenge the man from Murcia.

Speaking to Amazon Prime, the former WTA star told reporters: “It’s a shame that he’s (Federer) not playing at the moment because he’s had this knee surgery and we’re not quite sure when he’s back. He is aiming to come back in September / October time and I think he would have loved to have taken him on.

Alcaraz showcased his relentless hitting and supreme court coverage as the world's best players were left with no answer to his brilliance this week. “It feels great to be able to beat these players. To beat two of the best players in history and then Zverev, the world No 3. He is a great player. I would say this is the best week of my life,” he said.

Roger Federer, who is still recovering from a knee injury, will be 'sad' if he is unable to face Carlos Alcaraz, according to Annabel Croft
(

“I am 19 years old, which I think is the key to be able to play long and tough matches in a row. I am feeling great physically.” After his Madrid victory, and with Roland Garros looming, the world No 6 sent a message to his rivals, declaring he is ready to win the first of what he hopes to be many Grand Slam crowns.

“Yes I think so. I think I’m ready to win a Grand Slam, I’m ready to go for it,” he said. "It’s a goal for me this year to try and get my first Grand Slam. I’m going to work and let's see what’s going to happen at Roland Garros.”