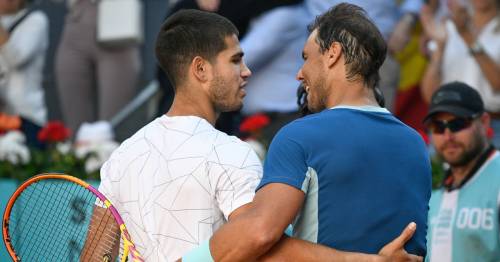 Rafael Nadal has called for comparisons between himself and his prodigious countryman Carlos Alcaraz to stop, after the 19-year-old's stunning start to the year.

Only Nadal has picked up more ranking points than Alcaraz on the ATP tour in 2022, with the veteran's Australian Open success accounting for more than half of the 3,530 points he has accrued thus far. Alcaraz has amassed 3,460 points, after claiming titles in Miami, Madrid, Barcelona and Rio de Janeiro, although Nadal is guaranteed to extend his lead in Rome this week, with the teenager absent from the Foro Italico as he prepares for the French Open later this month.

Alcaraz's success in the Spanish capital last week, when he toppled the first, second and third seeds in Novak Djokovic, Alexander Zverev and Nadal respectively, moved him up to sixth in the world rankings and cemented him as one of the favourites to win the the French Open.

Alcaraz is viewed as the greatest talent to emerge in the men's game since the likes of Nadal and Djokovic broke through the best part of 20 years ago, but Nadal does not want to see his fellow Spaniard burdened by the pressure of following in his footsteps.

"The only thing that we can do is enjoy the career of an amazing player like Carlos. Will be better, even if it's interesting, you stop comparing him to me," 21-time Major winner Nadal told reporters in Rome. "If he's able to win 25 Grand Slams, it's going to be amazing for him and for our country, and I will be happy for him. But let him enjoy his personal career.

"We cannot be, all the time, thinking about how was it, how he is today. He is what he is, he's fantastic. Probably in 2005, I will not say about myself that I was fantastic, but I think I was quite good too. Different moments, different careers, different way to approach things because the times are changing. But let's enjoy him. That's it."