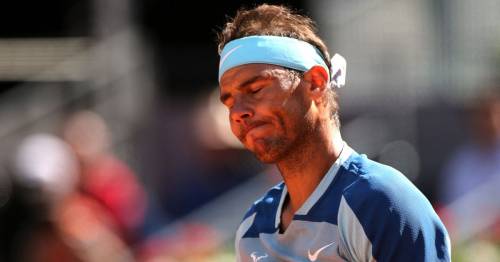 Tennis ace Rafael Nadal has described his body as an ‘old machine’ ahead of the upcoming French Open. The Spaniard made his comeback after a month out through injury at last week’s Madrid Open.

The 21-time Grand Slam champion’s event was cut short at the quarter-final stage, after losing to fellow Spaniard and eventual winner Carlos Alcaraz in a mouthwatering tie on the Madrid clay. His return in Spain was a timely one, with the French Open kicking off in a matter of weeks.

However it seems Nadal’s fitness isn’t what it once was, after he made some alarming comments regarding his body condition at this week’s Italian Open – hinting that he could well struggle at Roland Garros later this month.

He said: “When you're six weeks without touching a racket and having the chance to move your body… My body is like an old machine. To put this machine on again it takes some time.

“It's not the same when you're 19 than when you are almost 36, with all the issues I went through in my career. You need to build again the confidence, your movements, then you start feeling comfortable with your tennis.”

Nadal is no doubt a master on clay, with Madrid Open champ Alcaraz describing his fellow countryman as ‘the best player in history’ when playing on the surface. The 35-year-old however admitted that to compete at the highest level on his favourite surface takes its toll on his body, and therefore takes time to recover.

Can Nadal win a 14th French Open this year? Let us know in the comments section.

He added: “It's more about being confident with my movements, recover the speed, recover the way that I have to play on clay and let's see. I'm confident that I can play well. I need time, but maybe this week can be a positive week, maybe not. Who knows?”

His expertise on clay has seen Nadal dominate the French Open throughout his career, having won a mammoth 13 Grand Slam titles at Roland Garros. Despite his recent struggles with his body, the 35-year-old is aiming to be competing in Paris later this month.

He commented: “That's my goal [to compete at the French Open]… I didn't have another chance to approach this clay-court season with the things I went through. I'm going to give myself a chance and we'll see what's going on.”