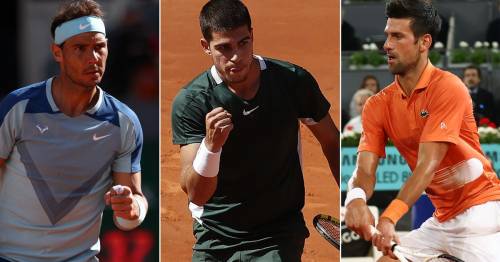 Rafael Nadal has backed Carlos Alcaraz to overcome Novak Djokovic in the last four of the Madrid Open, after the 21-time Grand Slam winner was defeated by the teenager in the quarter-final. The pair played out a headline clash on Friday, as it saw Spain’s young and old meet on home soil.

Alcaraz secured his maiden victory over hero Nadal, winning 6-2 1-6 6-3 on a day to remember for the 19-year-old. Victory moves him one step closer to a triumph in his home country, but it isn’t set to get any easier for the teenager as he takes on world No.1 Novak Djokovic on Saturday for a place in the final.

Nadal believes his Spanish counterpart has what it takes to see off Djokovic, but warned his compatriot he cannot afford any lulls against the Serb after Alcaraz won just one game in the second set of their meeting after a tumble on the baseline seemed to temporarily unsettle him.

Nadal said: “Carlos can win perfectly. I don't see any reason why he cannot win. It's true that he cannot have the downside that he had on the second set today, but he plays with a lot of adrenaline.”

The 2022 Australian Open champion proved gracious in defeat, as he congratulated Alcaraz. Nadal commented: “The first thing is to congratulate him. First of all, happy for him. He has been better than me in various facets of the game and I need to improve these days.

"It is accepted naturally and calmly, with the certainty that there is a path to follow and arrive with real options to generate opportunities. It is an easy defeat to digest, we knew what we were coming here for and we have to congratulate Carlos, he is playing well and I wish him the best for the rest of the tournament."

The respect was reciprocated by Alcaraz, who said: “It means a lot to me. All the hard work I put in every day has paid off. To beat Rafa – the best player in history on clay – it means a lot.”

Will Alcaraz beat Djokovic in Madrid? Let us know in the comments section below.

His attention now turns to facing Djokovic on Saturday afternoon and, despite the mammoth task ahead, Alcaraz is feeling confident. "I’m focusing on tomorrow," he said. "I will text [David] Nalbandian on how he did it [laughs]. I will fight and let’s see what happens.” Nalbandian is the only player to have beaten Nadal, Djokovic and Roger Federer in the same tournament, a feat the Argentine achieved at the Madrid Open in 2007.

Previous : Harry and Meghan ‘shouldn’t be focus of Jubilee’ says expert after Queen’s balcony ban
Next : He survived the Second World War, but this Nova Scotia airman never made it home