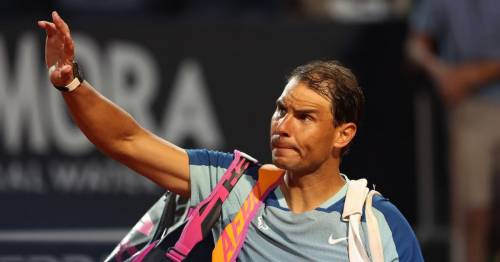 Rafael Nadal has admitted he will need a doctor with him at the French Open. Just a fortnight after returning from a rib injury, the great Spaniard’s chronic foot problem flared up during Thursday’s match with Denis Shapovalov.

After convincingly winning the first set 6-1, the world number four lost sets two and three 5-7, 2-6 and hobbled to an early exit in Rome. Despite the concerns surrounding his fitness, Nadal remains hopeful regarding his chances of regaining his Roland Garros crown and a medic will accompany him as he targets a record-extending 22nd Grand Slam.

“First thing that I need to do is to [not] have pain to practise, that's it… It's true that during the French Open, Roland Garros, I’m going to have my doctor there with me. That sometimes helps because you can do things,” Nadal said post-match. “In the positive days and in the negative days, you need to stay and to value all the things that happened to me in a positive way.

“Then days like today (Thursday), just accept and try to keep going even if sometimes it's not easy for me.” Nadal began the match on the front foot, hitting deep cross-court to Shapovalov’s backhand before drilling his own backhand down the line into the open court.

Nadal's struggles with his foot intensified midway through the second set and he struggled in the third too. “The toughest thing for me today is honestly I start to feel myself play much better," he shared. "I started the match playing much better. My practice was much better, the warmup, than the other day.”

Nadal's foot injury curtailed his 2021 season, and he didn’t play for five months before returning in January, when he captured the Melbourne Summer Set and the Australian Open title.

He has until May 22 – the French Open start date – to fully recover and will do everything in his power to be competitive in the French capital. “I am a player living with an injury; it is nothing new. It's something that is there,” he added. “Unfortunately my day-by-day is difficult, honestly… it’s difficult for me to accept the situation sometimes.

“Since I came back, the foot has been tough,” he continued. “It's tough for me to be able to practise the proper way days in a row. So then you need to move well to compete at the highest level, something that I am not able to practise. It’s the time to accept the situation and fight. That's it… I don't know if rest, I don't know if maybe practice. But I still have a goal in one week and a couple of days. I’m going to keep dreaming about that goal.”