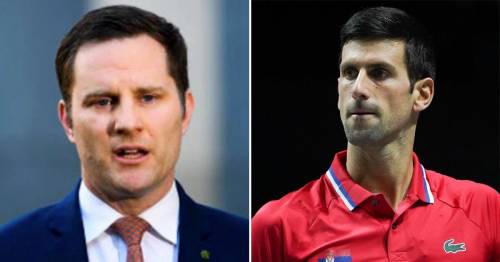 Over 60,000 people responded to the survey conducted by NewsCorp, which indicates the feeling among members of the public Down Under.

Hawke, 44, is deliberating over whether to send the Serb home despite a judge overturning his visa cancellation.

According to The Saturday Paper journalist Paul Bongiorno, the world number one’s visa is apparently set to be cancelled – which could see Djokovic, 34, banned from Australia for three years.

He claims the decision has already been made and the Australian Open ’s most successful player will be deported.

83% of Australians want Novak Djokovic to be deported, according to a NewsCorp survey
(

He tweeted on Wednesday: “I am hearing @AlexHawkeMP will boot out the Joker tomorrow.”

While Djokovic’s fate hangs in the balance, as things stand the 20-time major winner is still in the country and has been included in the Aussie Open draw.

He is set to begin his campaign against compatriot Miomir Kecmanovic on Monday.

More significant information emerged in the ongoing saga on Wednesday, as Djokovic tested positive for Covid-19 on December 16, and was seen posing for pictures with children the following day, although he claims he was not aware of his positive test at that time.

Furthermore, the world number one took part in an interview with French media outlet L’Equipe on December 18, and admitted he knew he had the virus on that day.

Djokovic blamed his agent’s error for an “administrative mistake” after claiming he had not travelled in the two weeks before his flight to Australia.

It has since emerged he was in Belgrade less than two weeks before his flight from Spain to Australia on January 4.

In a statement uploaded to social media, Djokovic wrote: “While I went home after the interview to isolate for the required period, on reflection, this was an error of judgment and I accept that I should have rescheduled this commitment.”

He added: “My agent sincerely apologises for the administrative mistake in ticking the incorrect box about my previous travel before coming to Australia. This was a human error and certainly not deliberate.”

Following the error on his travel forms, Djokovic could face prison time over claims he ‘lied’ to gain entry into Australia – which is being investigated by the country’s Border Force.

The travel declaration form is accompanied with a warning that giving false or misleading information is a ‘serious offence’, also punishable by civil penalties.

Furthermore, it reads: “If convicted, the maximum penalty is imprisonment for 12 months.”