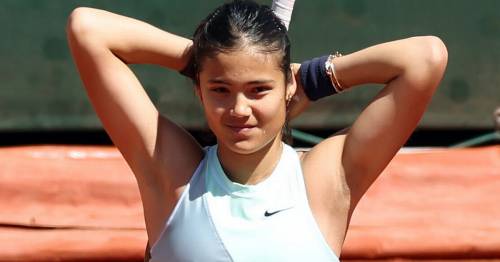 World No. 4 tennis star Paula Badosa has called for people ‘to stop’ piling the pressure on teenage sensation Emma Raducanu ahead of this month’s Wimbledon. Raducanu shot to fame last September, after becoming US Open champion at just 18-years-old after starting the event as a qualifier.

Unsurprisingly her historic win has thrown her into the public limelight, despite still being in the very early stages of her professional career. With the added attention of course comes extra pressures, and this has only mounted in recent months.

Fellow star Badosa, however, has urged those watching on to lay off Raducanu ahead of the teenager’s eagerly anticipated home Grand Slam event at SW19.

Speaking at the Eastbourne International, the world No. 4 said: “I mean her situation is very tough and she already did amazing things in this sport at a very young age.“I think most of the people are tough on her, but on the other side, maybe I can understand because [the] press is [the] press.

"Still, it puts so much pressure on her and she is a teenager still with so much to learn.” It is fair to say things have not been plain sailing for Raducanu, who has failed to repeat her Flushing Meadows heroics whilst out competing on the WTA Tour this campaign.

As a result, Badosa has called for the critics on the Brit’s back to ‘give her time’. She added: “She needs time and I think she needs more experience on tour and she will get it, but I think people have to stop putting all this pressure on her and expectations.

“What she did is play very, very well at one Grand Slam and she won it, so you can see how good she is but you cannot expect her to win every match and tournament because that is impossible.” Ahead of the upcoming Wimbledon, fellow British star Murray has also showed support for Raducanu – who also feels there is too much pressure placed on the 19-year-old.

Echoing Badosa, he said: “She needs time and she will get it because she has a lot of talent… Just let her be who she is, and you know, she might say some things that are a joke or that she maybe doesn’t mean or whatever.

“I think there needs to be a level of trust and respect between the player and the media. I also had problems early in my career where maybe certain things that I said got taken out of context or jokes that I might have made turned into big stories and big headlines where it turned things a bit sour and negative.”

Previous : Man recorded himself saying ‘I will kill your children’ before ploughing into schoolkids
Next : Serena Williams will find Wimbledon “super difficult” as star’s comeback nears