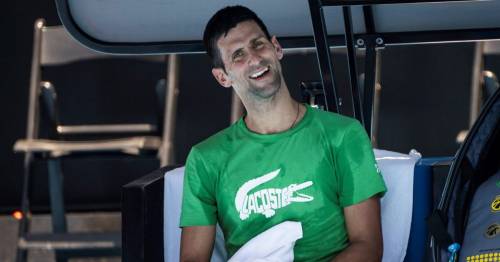 Novak Djokovic’s net worth amid Australian Open and deportation fears

Novak Djokovic at least won't have any problems funding his legal case as he continues to fight his potential deportation from Australia.

On Monday, the Serbian star won his appeal against having his visa revoked, seemingly paving the way for him to remain down under and defend his Australian Open title.

However, the country's immigration minister, Alex Hawke, possessed the power to overturn that decision – a notion which became increasingly likely after further allegations arose over Djokovic's conduct.

The unvaccinated world no 1 had initially gained a medical exemption from Tennis Australia on the basis he tested positive for Covid on December 16, but photos of him making public appearances when he should have technically been isolating went public.

Novak Djokovic has a reported net worth of $220 million
(

He was also then forced to explain why his immigration forms falsely stated he had not travelled abroad in the 14 days before arriving in Australia, despite having travelled from Serbia to Spain for a training camp.

Sure enough, Hawke cancelled his visa for a second time on Friday, which prompted the 34-year-old to immediately launch a second appeal. His case is due to be heard on Sunday.

Should he miss the Grand Slam tournament, he will also miss out on adding to extortionate career earnings.

According to figures released by statista.com , the 34-year-old is one of just three tennis players in history to have earned more than $100 million US dollars.

But while he, Roger Federer, and Rafael Nadal are tied on 20 Grand Slams, it is Djokovic who leads the money making stakes, having won more than $153 (£111.8) million.

Djokovic is continuing his fight against being deported
(

Djokovic isn't short of financial endorsements away from the court either.

According to Sporf , Lacoste pay the tennis superstar $9.4 (£6.86) million a year for him to wear their clothing, while footwear sponsor Asics send him $4 (£2.92) million a year. He also has numerous business interests, including his own vegan restaurant in Monaco – called Eqvita.

It all adds up to a reported $220 million fortune, putting him comfortably inside the 50 richest athletes in the world. This equates to £161 million.

Were he to eventually play at Melbourne Park, having been drawn against fellow Serb Miomir Kecmanovic in the first round, he would be targeting the highest amount ever offered by organisers for winning the tournament – with $4.4 (£3.2) million available to the men's winner.