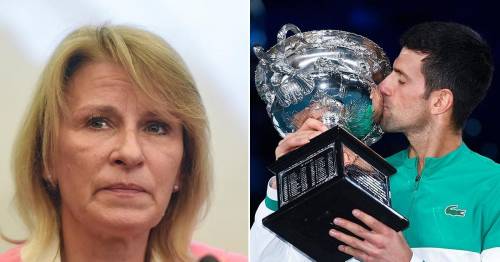 Novak Djokovic has 20 Grand Slams and 86 ATP titles to his name – but according to his mum the biggest victory of his career has now come away from a tennis court.

What has been a dramatic saga took a seemingly conclusive twist on Monday, when a court ruled the Serbian had won his appeal against being deported and could therefore play in the Australian Open.

This was despite having his visa revoked at Melbourne Airport last week, with border force officials arguing the medical exemption – granted to him by Tennis Australia given he recently contracted Covid-19 – was not sufficient for him to be able to enter the country.

As a result, Djokovic spent five nights in a government detention hotel in Carlton, Victoria, while his lawyers prepared their case for his appeal.

During that time his father Srdan was in constant contact with the Serbian media, at one point bizarrely comparing his son to "Spartacus" and labelling him a "leader of the Libertarian world."

And after Monday's ruling, the family held a celebratory press conference, during which his mother, Dijana Djokovic, said "This is his biggest win of his career, bigger than any Grand Slams he has won."

She also maintained that the world no 1 had done nothing wrong, and had adhered to everything asked of him.

"We're here to celebrate the victory of our son, Novak," she added.

"The boy who learnt not to put up with lies and cheating, and always fought for justice. He's done nothing wrong, he hasn't broken any of their laws, and he was subjected to torture and harassment.

"Never before have we faced a situation like this. This was extremely difficult and these five or six days we have tried to fight for him."

Srdan and Djordje Djokovic, the brother of the tennis star, were also there to address the media along with his Uncle Goran. However, they abruptly ended the conference after being asked why Djokovic was pictured unmasked at events on December 17 – just one day after testing positive for Covid-19.

And the 34-year-old's spot at Melbourne Park isn't cemented just yet, given Australian immigration minister Alex Hawke still has the authority to cancel the visa for a second time. He's expected to announce his decision on Tuesday.

Djokovic meanwhile, has taken to Twitter to reiterate his desire to play in Melbourne, telling fans "For now I cannot say more but THANK YOU all for standing with me through all this and encouraging me to stay strong."

Previous : Who is Alex Hawke? The one man in Australia who still has the power to deport Novak Djokovic
Next : Boris Johnson weighs in on Novak Djokovic drama as he drops Wimbledon hint