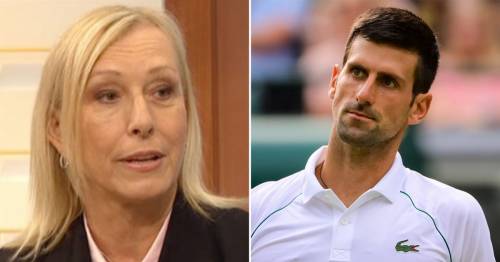 Tennis legend Martina Navratilova has urged Novak Djokovic to do the "right thing" and leave Australia before the first Grand Slam of the year gets underway.

The Serbian has endured a rollercoaster, and controversial week, which saw him have his visa rejected upon arrival in Melbourne after he was granted a medical exemption, before he was detained at a quarantine hotel.

The world No 1 appealed the visa decision, which subsequently went in his favour but his Australian Open participation is still in doubt.

Djokovic is still preparing to play in the Australian Open after his name was included in the tournament draw, and he will begin his campaign against compatriot Miomir Kecmanovic.

But many are calling for the world No 1 to be deported by Australia's immigration minister Alex Hawke, who still has the power to do so and set to make a decision imminently.

Members of the tennis community have voiced their opinion on the debacle, notably Navratilova, who thinks the nine-time Australian Open champion has done enough damage and should leave the country.

"The best thing for Novak to do I think would be just say ‘you know what, there are too many mistakes, this is not OK and the right thing to do is just to go home," she told Seven's breakfast show programme Sunrise on Thursday.

"It’s just the right thing to do, but I don’t think he will do that because he wants that 21st title."

To add to Djokovic’s plight, the world number one took part in an interview with French media outlet L’Equipe on December 18, and admitted he knew he had the virus on that day.

He wrote: "While I went home after the interview to isolate for the required period, on reflection, this was an error of judgment and I accept that I should have rescheduled this commitment."

He also blamed his agent’s error for an "administrative mistake" after claiming he had not travelled in the two weeks before his flight to Australia.

It has since emerged he was in Belgrade less than two weeks before his flight from Spain to Australia on January 4, which he could see him fact time behind bars.

The 34-year-old added: "My agent sincerely apologises for the administrative mistake in ticking the incorrect box about my previous travel before coming to Australia. This was a human error and certainly not deliberate."

The tennis icon has long been against the Covid vaccine and Navratilova believes he should set aside his views for the sake of tennis and society as a whole.

Navratilova was outspoken on her views of the world No 1

"Your personal beliefs have to be trumped by what is good for the greater good for those around you a your peers," she added.

"If I were in the same situation and I didn’t want the vaccine, worried what it may do to my body, everyone else is doing it because it is the right thing to do and the country demands it.