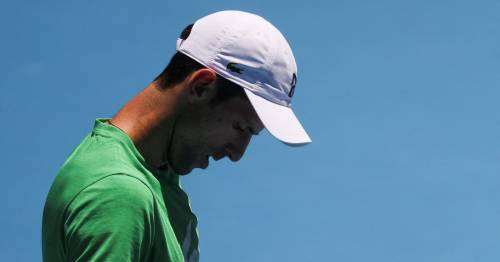 Novak Djokovic is set to spend more time back in detention after his visa was cancelled by Australian authorities for a second time.

Immigration minister Alex Hawke used his power to block the Serbian's entry to the country after a judge had ruled against the Border Force's initial decision to do so.

Djokovic's lawyers have again appealed the decision, and a new court case began shortly before 10am UK time (9pm in Melbourne) on Friday.

At the hearing, a lawyer representing the Australian government suggested that Djokovic will be taken back into custody after being allowed to spend tonight at his own pre-booked accommodation.

The Serbian is set to be interviewed at 8am on Saturday (local time) by Australian Border Force (ABF) officials at his lawyers' offices.

Novak Djokovic looks set to be detained again in Australia
(

Stephen Lloyd, for the government, told the court that Djokovic would then be allowed to remain at the office to assist in the preparations for the second appeal – which could take place on Sunday.

However, there would be two ABF officials on the same floor as him at all times, and he would then be taken into custody once his work was completed.

Djokovic would then spend Saturday night back in detention ahead of the next court case.

A location for his detention was not discussed, though it is assumed he could return to Melbourne's Park Hotel where he spent his first detention period.

The decision is another blow to the Serbian's preparations for the Australian Open, as he will not be able to practice on the court at the Rod Laver Arena while in detention.

Djokovic's lawyers are doing their best to fast-track the process, as the tennis star still harbours hopes of being able to play in the tournament.

Nick Wood, for Djokovic, described the tennis star as a "high-profile" character of good standing who is of "negligible risk" to the wider Australian population.

Djokovic still hopes to play at the Australian Open
(

Wood also went on to criticise Hawke for announcing the decision at around 6pm local time on a Friday and only giving them a very short period of notice before the news was made public.

This, he argued, has prevented his legal team from properly filing an appeal sooner.

"We are where we are because of the time the minister has taken. We are moving as fast as we can," Wood told the court.

He went on to tell the court that "every minute is precious" for Djokovic, who could be scheduled to play his opening round match on Monday or Tuesday evening.

For live updates of the Novak Djokovic case, follow our LIVE BLOG.

Previous : Novak Djokovic may still play Australian Open despite visa being cancelled a second time
Next : Adorable lurcher in kennels for whole pandemic can’t be without Winnie the Pooh toy