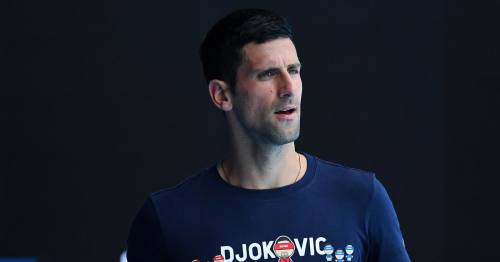 Novak Djokovic could be facing disruption to his career for the next three seasons after having his Australian visa cancelled for the second time.

The Serbian was held at Melbourne Airport when he arrived Down Under last week, but was saved from immediate deportation by a successful legal challenge.

But even though the judge ruled that he could stay, Australia's immigration minister still had the power to deport Djokovic himself so the tennis star's fate was still very much up in the air.

And that is exactly what Alex Hawke has done, citing "public interest" for his decision to step in and exercise the power given to him by the Migration Act.

"Today I exercised my power under section 133C (3) of the Migration Act to cancel the visa held by Mr Novak Djokovic on health and good order grounds, on the basis that it was in the public interest to do so," a statement from Hawke's office said.

"This decision followed orders by the Federal Circuit and Family Court on 10 January 2022, quashing a prior cancellation decision on procedural fairness grounds.

"In making this decision, I carefully considered information provided to me by the Department of Home Affairs, the Australian Border Force and Mr Djokovic.

"The Morrison Government is firmly committed to protecting Australia’s borders, particularly in relation to the Covid-19 pandemic.

"I thank the officers of the Department of Home Affairs and the Australian Border Force who work every day to serve Australia’s interests in increasingly challenging operational environments."

Not only does that announcement leave Djokovic unlikely to play in this year's Australian Open, which begins next week, it threatens to block his participation in all competitions in the country for the next three years.

People who unsuccessfully apply for an Australian visa are usually banned from trying again in that time frame.

Novak Djokovic has had his visa cancelled for a second time
(

Hawke also had the power to waive that period if he chose to do so, but there was nothing in his statement mentioning that ban period so it seems unlikely that will be the case.

It leaves the world number one set to miss out on the next three chances he had to attempt to win all four Grand Slams in a calendar year – an achievement he only narrowly missed out on last year.

The saga could yet rumble on for a few more days, as Djokovic has the right to launch another appeal to contest Hawke's decision.

But the legal bar for overturning the minister's power is far higher than it was last time, making it unlikely that the tennis star will be successful in another court challenge.