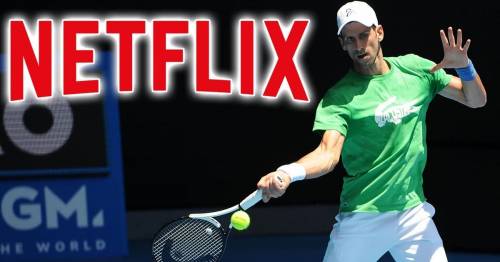 The series is set to become tennis’ version of Drive to Survive, which is now three seasons deep and has massively boosted the popularity of F1.

According to the Mail, a camera crew is currently in Australia as they begin shooting for the series, which is likely to be released in 2023.

Tennis’ governing stakeholders have all agreed on the project which is scheduled to air on the giant streaming platform.

The man behind Drive to Survive James Gay Rees, is set to be the show’s executive producer, while the series will be made by London-based Box To Box Films.

The project, which was made official before Christmas, has also received the backing from the men's and women's tours as well as all four Grand Slams, who are not always on the same page.

Cameras will follow the players and grant an in-depth look in areas such as the locker rooms and treatment areas where consent is given, and to player lounges.

One of the players who was keen for tennis to produce their own docuseries was Andy Murray.

The former world number one thinks the sport could be impacted in the same way F1 has been, and has experience of filming his own docuseries Andy Murray: Resurfacing, which chronicled his recovery from injury and aired on Amazon Prime Video.

“I would [be open to a similar docuseries in tennis] because I think that there is huge benefit to the sport,” Murray told Eurosport last month.

“I don't think tennis is open enough to allow access like that. It's a difficult one because, yeah, it's brilliant."

He added: “A lot of people have spoken about Drive to Survive. I've watched a few episodes myself. I haven't watched the whole thing but I enjoyed it and, yeah, something like that would be really good for tennis.

“A lot of players would [be open to it] but you also need to trust the people that are filming as well.

Drive to Survive has massively boosted the popularity of F1

“There has been documentaries or docuseries in the past that have followed sports teams and it hasn't gone well.

"The football teams or whoever have come out of it looking terrible.

“So I think providing it's done well and that there's a level of respect and trust there between the athletes and the people that are filming it, I think it can be unbelievably positive.”

Djokovic will no doubt be a key figure in the program, after having his visa cancelled once he arrived in Australia, before being detained for several days.

Djokovic has been practicing in Melbourne, but still might not get to play the Australian Open
(

He has since had his visa cancellation overturned, but could still be ordered to leave the country by Australia's immigration minister Alex Hawke, whose decision is set to be announced on Friday.

As things stand, Djokovic has been included in the main draw for the Australian Open, and is set to begin his campaign against compatriot Miomir Kecmanovic.

Previous : Australian Open dealt blow amid Novak Djokovic saga as Omicron cases surge in Melbourne
Next : Pressure rises on Alex Hawke as 83% of Australians call for Novak Djokovic to be deported