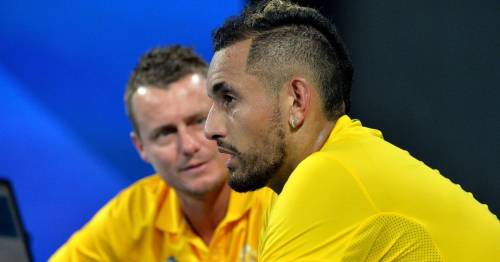 Nick Kyrgios and Lleyton Hewitt’s feud has reignited as Mats Wilander slammed the 27-year-old’s playing style as ‘horrible’. The three-time French Open winner claimed the Australia Davis Cup captain told him young Aussie kids are copying the controversial star on court, which he deemed as ‘horrible’.

While on Eurosport, the 57-year-old shared his conversation with Hewitt and how he believes some of Kyrgios’ antics are influencing children. “It's just a game where you learn a lot about life and educate and rules and these guys are taking it to a complete different level,” the tennis legend said.

"And I do know from Lleyton Hewitt telling me that every kid in Australia basically, is doing what Nick Kyrgios does. I'm not saying they're throwing rackets and whatever, but they hit the ball like Nick Kyrgios and that's kind of bad enough in a way because Nick is so talented, but he doesn't use his feet at all in any of his shots.

“He just slaps it with his arm. And they look up to these guys. So I think it's atrocious. I actually think it's horrible. I think breaking a racket on a tennis court is the lowest for me because most kids, they cannot afford to buy tennis rackets.

“I think it's wrong. I think it's completely wrong.” Hewitt was once Kyrgios' mentor but a bitter feud divided them ahead of the 2019 Australian Open.

Kyrgios and Hewitt reportedly cleared the air at Indian Wells in 2020 but tensions simmered once more when Kyrgios was controversially omitted from the Davis Cup team by team captain Hewitt. But this was later cleared by compatriot and doubles partner Thanasi Kokkinakis, who said Kyrgios ruled himself out of selection.

As we have seen on multiple occasions throughout his career, Kyrgios is never too far away from losing his temper on the court, be it on an official or his racket. During the Miami Open, he called umpire Carlos Bernardes an "absolute clown" and refused to shake hands with the official before storming off court.

Prior to that, he'd shouted: "Get rid of every single staff and start over. I'll run the sport. I could do a hundred times better job." The saga followed him being fined more than £19,00 for nearly hitting a ballkid when throwing his racket at Indian Wells. But despite his latest indiscretion, he did not face a ban from ATP events.

Kyrgios was given four fines having been deemed guilty of verbal abuse, an audible obscenity, and two counts of unsportsmanlike conduct. The total amounted to £26,500.

Previous : Emma Raducanu describes herself as “a loner” after split from coach Torben Beltz
Next : Novak Djokovic says teen superstar Carlos Alcaraz is a favourite to win French Open