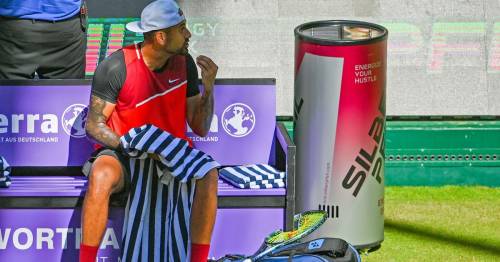 Tennis firebrand Nick Kyrgios ramped up his Wimbledon preparations by knocking Stefanos Tsitsipas out of the Halle Open on Wednesday.

The victory didn't come without sacrifice, however, as Kyrgios left the match one racket lighter following an outburst when he lost the first set. Damaged equipment or not, Kyrgios went on to beat Stitsipas 5-7, 6-2, 6-4 and will meet Pablo Carreno Busta in the quarter-finals.

The 27-year-old escaped was given just a warning for his racket-smashing reaction after surrendering the first set. Kyrgios was then leading 2-0 in the second salvo when he was warned again for taking too long getting ready to return.

The world No. 65 was then seen remonstrating with ATP supervisor Hans-Juergen Ochs at OWL Arena. Kyrgios remained steadfast in his defence, however, and insisted there was nothing malicious about his actions.

"He [the umpire] said I was playing too slow – statistically I'm one of the fastest," said Kyrgios after Wednesday's result. "I had to walk to the sidelines to get my towel, there is this thing called sweat in 30 Celsius heat that runs down onto your hands. I needed to wipe my hands and he gave me a warning."

Kyrgios completed his comeback with a thundering ace and pulled off a series of remarkable winners throughout the match. He's now won three of his four encounters with world No. 6 Tsitsipas, though this was the first time the pair have met on grass.

Do you think Nick Kyrgios will ever win a singles major? Let us know in the comments section.

The result in Halle could have a big bearing on Kyrgios' fortunes at Wimbledon, which gets underway on June 27. The Canberra native could be an unseeded underdog at SW19, but he'll receive a seed for the London major if he reaches the final in Germany.

Daniil Medvedev is among the potential players he could face in the decider should that be the case. Kyrgios also paid tribute to the crowd in Halle for their support, but not without giving himself a pat on the back as well.

"The support I get from crowds around the world is amazing. They want me to go out and put on a show," added Kyrgios. "I'm happy to still be able to produce this level with the tournaments I play. It is a testament to how hard I do work when I'm not playing."

Previous : Inside nudist holiday retreat with giant naked Monopoly board but getting ‘excited’ banned – World News
Next : Ascot on Thursday: Tips and runners for every race on Ladies Day featuring the Gold Cup