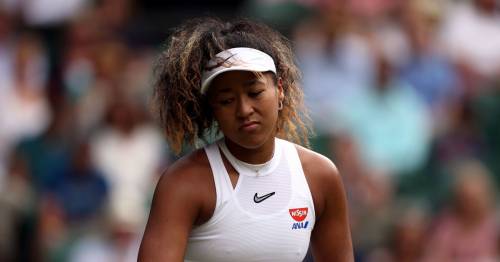 Naomi Osaka 's "grass dreams" appear to be over for the time being after she withdrew from this year's Wimbledon Championships due to an Achilles injury.

The 24-year-old withdrew from the Italian Open in May, though she did feature at the French Open later that month, where she bowed out to Amanda Anisimova in the first round. Osaka had previously suggested she might snub SW19 after the tournament was stripped of ranking points.

That decision was made by the WTA and ATP following the All England Club 's decision to ban Russian and Belarusian athletes from competing. This was in response to Russia's ongoing invasion of Ukraine, though Osaka's concerns were focused on her injury when it came to explaining her absence.

"After the storm comes the calm. This is a saying that I'm actively trying to master," Osaka wrote on Twitter, accompanied by a picture of her training on grass. "I feel like life keeps dealing cards and you're never gonna be used to them but it's how you adapt to uncomfortable situations that really says stuff about your character.

"I've been repeating mantras in my head a lot recently. I don't know if it's to subconsciously help myself through stressful times or to ease my mind into realising that everything will work out fine as long as I put the work in. Cause what more can you do?"

Over on Instagram, Osaka also uploaded photos and a video relating to her Achilles rehabilitation, writing: "Trying to find the positives in a negative situation so all love. But there goes my grass dreams." The four-time major champion hasn't competed at Wimbledon since 2019 and has never made it past the third round of the grass-court Slam.

Naomi Osaka has withdrawn from Wimbledon with an Achilles injury
(

Who are you backing to win Wimbledon? Let us know in the comments section.

Osaka commented in May that while she wanted to gain experience on grass, she's the kind of player motivated by improving her place in the rankings. Although Wimbledon will still feature a sizeable prize purse and the opportunity of collecting a major, that didn't appear to tempt her too much.

“I feel like if I play Wimbledon without points it’ll be more like an exhibition," she said. "I know this isn’t true, but my brain just feels like that way and whenever I think of something like an exhibition I just can’t go at it 100 percent."

Along with the former world No 1, Alexander Zverev, Dominic Thiem and Eugenie Bouchard will each be absent from the Wimbledon draws due to injuries. Rafael Nadal has suggested he'll look to power through his foot issues and play in London, though the Spaniard's fitness remains a concern.