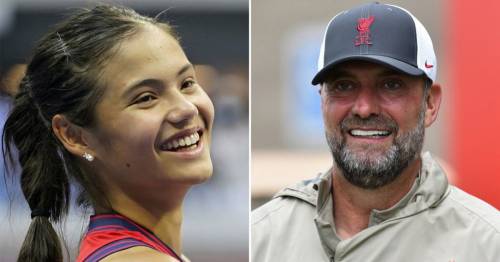 The British teenager beat Leylah Fernandez last Saturday to seal an historic US Open win, becoming the first qualifier to ever capture a Grand Slam title.

Raducanu didn't drop a single set during a remarkable run at Flushing Meadows and showed no sign of nerves as she triumphed in only her second major tournament.

It's fair to say that Klopp, 54, knows a thing or two about the big occasion himself, having taken Liverpool to two Champions League finals and ending the club's 30-year wait for a top flight title in the 2019/20 season.

And the German was left in awe of the way Raducanu performed.

"I was really impressed by the power and the speed.

‘"The whole game. Women’s tennis is obviously in a brilliant moment. These two girls were 18 and 19 and what they showed was massively impressive."

Klopp also declared himself "overwhelmed" at how both finalists conducted themselves post-match.

"We watched the interviews as well and both girls how they spoke at 18 and 19 that was inspiring, maybe even more so than the tennis and that was already inspiring enough.

"I was overwhelmed by the way they presented themselves.

"Fernandez was obviously disappointed losing the game and rightly so. Emma showed great respect for her, they knew and hoped they will face each other in the future very often and be in many more finals.

"It was just a great show of sportsmanship and elite sport. Emma is surely the talent of the century but without the hardest work it is not possible to be there.

"I will watch women’s tennis for sure much more now again than I did in the last few years."

Klopp wasn't the only one football figure to embrace Raducanu's heroics.

Gary Lineker broke the habit of a lifetime by acknowledging the young star's win whilst presenting Match of the Day .

"First time in my life I’ve ever tweeted whilst on air but my goodness what a performance, what a triumph, what an amazing young woman.

"Congratulations Emma Raducanu on a truly staggering achievement. US Open winner at 18 without losing a set. Extraordinarily fabulous."