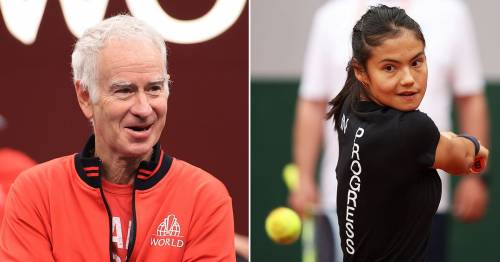 Tennis legend John McEnroe has told Emma Raducanu she needs those around her to help her "replicate what she was feeling" when she won the US Open last year, following her split with coach Torben Beltz.

That victory catapulted Raducanu into superstardom, but the 19-year-old has struggled with injuries in her bid to recreate that success this year. And she has also split with three coaches in the space of just nine months, having first parted ways with Nigel Sears after her breakthrough performance as a wildcard at last year's Wimbledon.

Raducanu then split with coach Andrew Richardson after her US Open win, before appointing Beltz as her new coach. However, after around five months working with Beltz, Raducanu split with him as well, announcing plans to "transition to a new training model".

And McEnroe believes the fact that Raducanu will not have a full-time coach at the French Open will not matter too much, suggesting that instead she simply needs "to find a group that can get her comfortable and allow her to train in a way that she understands is good for her".

Speaking to the Daily Mail, McEnroe said: "I didn't believe in a full-time coach either so it really depends on the player. These days it seems every player has a coach and I don't recall who it was when she won the US Open but I must admit I was surprised they parted ways after she won that; it was an incredible shock for her to win that.

"I'm not close enough to the situation to understand what is going on but I'm sure there is a lot of people that would want to coach her. She obviously did something spectacular at the US Open and you would try to, in some ways, replicate what she was feeling at that time to allow her to play freely.

"That's a lot harder now because the expectations are a lot higher so she has to find a group that can get her comfortable and allow her to train in a way that she understands is good for her and be able to go on the court and feel some type of joy and happiness playing.

"That's the trick. But there is no way to do that, or understand how to do that, unless you understand the person. That's the job of a coach or people around her to get her to a place to do what she does best."

Previous : Manchester marks 5 years since terror attack with ‘love is stronger than hate’ message
Next : Britain’s Got Talent ‘work out’ how ‘Harry Potter’ magician pulled off magic trick