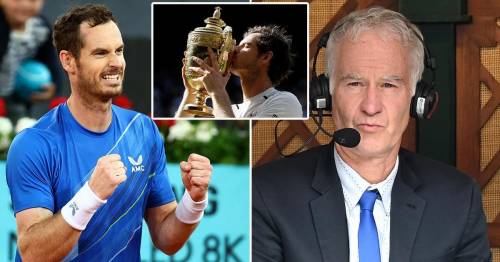 Andy Murray has been spectacularly backed to win Wimbledon for the third time in his career by tennis legend John McEnroe.

Murray is set to compete in the singles at Wimbledon for just the second time since his hip surgery in January 2019. Murray is eyeing a deep run at the Championships, his home grand slam which he emerged victorious at on two occasions in 2013 and 2016.

Six years after he won his second Wimbledon title, Murray is back at the All England Club on the brink of remarkably re-entering the world’s top 50, despite having a metal hip while trying to shake off a minor abdominal injury. He picked up the issue at the recent Stuttgart Open, and there are fears his play could decline as a result.

The two top seeds for the men’s draw will be three-time defending champion Novak Djokovic and men’s all-time major champion Rafael Nadal, who is chasing the fabled Calendar Slam which eluded his Serbian rival in 2021. However, Murray has been backed by McEnroe due to his vast experience and undeniable record on grass.

“If he’s fit, I believe Andy is one of the contenders,” McEnroe said ahead of the SW19 tournament. “I actually believe he’d be one of a handful of guys that could win it.

“I don’t know if he is fully fit. Maybe he doesn’t even know that. But he’s got loads of experience. He knows how to play better than almost anyone on that surface. He’s prepared himself well, I believe, for that very moment.

“If he’s looking at Rafa and Novak, he’s got to be thinking he’s going to have one last hurrah. I think that’s entirely conceivable. What I don’t know is how close to 100 per cent he is.

“Andy has the experience. If he is physically fit, you can’t count him out against anyone. There’s not a lot of people that I would bet on against Murray, honestly.

“If he’s at the level, even at 90 per cent of what he was, I think he’d beat all but like four to six people. If he’s 100 per cent, and let’s just say he’s close to that, he could do anything. It’s sort of exciting because it puts him back in the mix, which I think he deserves.”

Ahead of this year’s Wimbledon, the 35-year-old skipped the French Open to effectively prepare himself for the grass-court season. He then stormed to the final of the Stuttgart Open before he was defeated by Italian star Matteo Berrettini and picked up the abdominal strain.

To aid his preparations, Murray has also linked up with former coach Ivan Lendl for the third time after the duo won the title in 2013 as well as the 2012 Olympic gold medal. When he won nine years ago, Murray became the first British men’s tennis player to win Wimbledon for 77 years – and he added another in 2016 for good measure.

Do you think Andy Murray can win Wimbledon for a third time against all odds? Let us know in the comments section.


McEnroe believes Murray has a stellar chance of winning the tournament provided he is fully fit, and the three-time Wimbledon champion suggested Lendl’s willingness to reunite with the Brit is a sign he could be a genuine contender. The American said: “I saw Ivan recently. I mean I don’t think he’d do it if he didn’t believe Andy could win one.

“I honestly don’t believe he would be part of this. So I think that sends some type of message as well. And I’m hopeful that he can do it. That would be a hell of a story.”

McEnroe added: “I think some tennis aficionados forget Andy has been in 11 finals and won three of them. He was number one in the world at one point, you know a ranking ahead of these other legends.

“I know it had to be tough for him in a lot of ways to watch these guys continue to amass records where he basically couldn’t play at all. I’m not a doctor. But I’m amazed that he’s moving as well as he is.

“If you’ve got a metal hip, that would tell me that you wouldn’t move as well, that you would be stiffer, that you couldn’t react as quickly. I just don’t see how it’s even possible. But I noticed, mostly this year, a definite improvement, almost to where it was close to what I remember seeing from him.”